Your Holiday Donations Help Us Make Maps into Obama's Administration

Thanks for everyone who made it to my favorite venue in Chicago - Schubas - this past Friday to listen to some music in support of tutoring and mentoring. And of course, thanks to Schubas for donating 100% of the door to Cabrini Connections as well! (A great example of community leaders creatively using their resources - their niche - to make a difference in the lives of Chicago's students during the holiday season.)

I was really very excited to perform at the event with my band, "Trakan"... alongside Chris Warren's band "Howling Poppies" (Chris in a coordinator for Cabrini Connections, and occasionally plays drums with us, as seen in the picture above - taken at the Schubas benefit).

From the stage, we had an opportunity to briefly remind the audience why tutoring and mentoring is such a vital cause, and to thank them for doing what they could (by attending if nothing else) to contribute. (Then, of course, we rocked their asses :)
To everyone who could not attend the performance, I would like to personally thank you for any help you have provided for the cause this past year, and for any time or funds donated to Cabrini Connections and/or Tutor/Mentor Connection.
Which reminds me - please don't forget that your contributions as volunteers, donors, messengers, hosts, etc... to these sister organizations don't just help the Cabrini students. They help us continue to make the maps featured here on this blog... 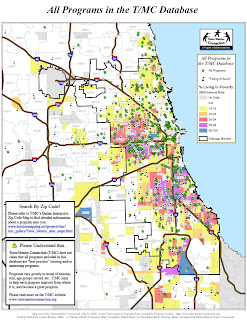 ...Maps which have been used by community, business, spiritual, and political leaders to develop strategies that have led to the creation of new programs in areas of need (areas which are easily exposed by creating maps and other visual representations of existing data).
As we move into 2009, on the day President Elect Obama has introduced Chicago Public Schools boss Arne Duncan as Secretary of Education, I can't help but hope our city's tutoring and mentoring programs can serve as exemplary models for the nation moving forward. And I dream of continuing to create maps that can be used as strategic tools by the President and his Secretary of Education to make this hope reality.
Please help by making a donation this holiday season to support our mapping efforts here at Tutor/Mentor Connection. And continue to enjoy a safe and rocking holiday season!
Posted by Mike at 12:18 PM

I recently came across your blog and have been reading along. I thought I would leave my first comment. I don't know what to say except that I have enjoyed reading. Nice blog. I will keep visiting this blog very often.