Chicago's Public Housing Changes Not Good for All 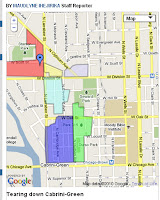 Today I read this report on the Better Government Association web site, titled "CHA's Transformation Reshaped a City".  It shows while the displacement of public housing residents led to gentrification in some neighborhoods, which had a positive impact on CHA residents who were able to obtain vouchers and live in these areas, most of the benefit went to those moving in, and less went to the poor people who most often moved into other neighborhoods which already held concentrations of poverty.

In 2010 I included the map of Cabrini-Green (shown above) in this blog article, under the title, "Cabrini-Green gone. Are you sure?"

The BGA article includes a statement that 3200 families now live in Chicago's Near North area.  If families average 3 children per family, that would mean there are at least 9,000 low-income kids hidden in this area and I'm not aware of a lot of non-school tutor/mentor programs still there to help them.  Maybe they don't need as much help since affluent families tend to support schools with better trained teachers and more learning opportunities. That benefits poor kids, too.

In January I created a new map showing locations of the youth serving organizations in my database.  If you set my map next to the map in the BGA article, you can begin to determine what level of non-school, volunteer-based tutoring, mentoring and learning programs are available in areas where former CHA residents have been moving.

This is an analysis that should include business, political, government, religious, university, CPS, media and residents, with neighborhood groups focusing attention on each of the high poverty community areas.  It's something that should be funded by the major foundations, or by the city, or the CHA.

The result should be the growth of more and better services to youth and families in the high poverty areas where former CHA residents live, as well as the development of needed programs in the areas where poor people are living mixed in with people of more affluent backgrounds.
Posted by Tutor Mentor Connections at 3:46 PM No comments:

Maps that Make You Rethink the World

My friend Terry Elliott, a professor at Western Kentucky University, sent me this Washington Post article, which is titled "Six maps that will make you rethink the world."

I encourage you to read the article, look at the maps, and spend some time in deep thinking and conversation with others about what the maps of the world will, or should, look like in the year 2100.

These maps show population changes, growth of cities, and environmental changes taking place over the next century.  Since 1994 when I first started using maps, I've focused on Chicago, and highlighted high poverty areas with my maps.

However, I've also suggested in many forums that there ought to be a world map that shows areas of poverty, or other issues, and that supports deeper learning and discussion by people throughout the world that leads to better management of these changes.

In this link on my web library I point to some of the sites I've found. I'm sure there are more.

Posted by Tutor Mentor Connections at 1:49 PM No comments:

Email ThisBlogThis!Share to TwitterShare to FacebookShare to Pinterest
Labels: planning

These maps can be seen in this article written by Greg Hinz, in the 6/13/2016 issue of Crain's Chicago Business.

I wrote about this today in this article on the Tutor/Mentor Blog.
Posted by Tutor Mentor Connections at 2:14 PM No comments:

Today I'm sharing three maps, which show participation in two important conversations held on June 8, 2016. One was a #promisechat hosted by the America's Promise organization, created following the 1997 President's Summit for America's Future. The second was an #Educationdisparities chat, hosting by the Brookings Institution. These were back to back, one starting at 1pm CST and the other at 2pm CST. The maps below show participation in each event, then show participation in both events. This shows the crossover of people who participated in both, such as myself.

There's much that event organizers can do using these maps, to understand who they are reaching, and to plan future events that recruit more who need to be involved in these conversations.

There's also much that anyone using Twitter can do to learn who the major influencers in each conversation are, and to reach out and begin to build a relationship by following them.

I want to thank Marc Smith and NodeXL for creating these maps for me at no cost.

Connected Action creates maps for business users for a $79.95 per map fee, and they offer discounts to registered non-profits. Interested organizations are encouraged to request a few sample network maps and reports to understand their value and application.

Click the http://www.connectedaction.net/shop link to learn more about their work and how you can begin to obtain maps like these.

Use the coupon code sna4nptmi and receive a non profit discount. The first 50 to use this code will receive their first two maps for free.

Other links to view to learn more.

For those who may be interested in learning more about network analysis and tools they might use, here's one article you might look at. If you want to dig deeper, this link points to a site where I've aggregated a few more article to read..
Posted by Tutor Mentor Connections at 4:08 PM No comments: 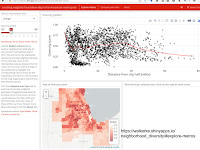 Here's a map platform that enables you to look at diversity patterns, at the city level. In the "about" section on this site it says "This application is in support of the article in Urban Studies, “Locating neighborhood diversity in the American Metropolis.” The article analyzes geographic variations in neighborhood racial and ethnic diversity over time in large metropolitan areas in the United States."

Combined with other map platforms,  readers and activist can build an understanding of where poverty and segregation are most concentrated in Chicago and other cities.
Posted by Tutor Mentor Connections at 3:46 PM No comments:

Email ThisBlogThis!Share to TwitterShare to FacebookShare to Pinterest
Labels: race

Most Dangerous Cities in America. Look at the maps 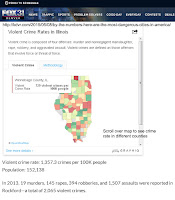 This May 2015 story shows the 20 most dangerous cities in America, and includes a map of each city showing the highest crime areas in each city.  While Chicago gets a huge mount of media attention for it's violence, it is not on the list of top 20.

I've shared information about the Tutor/Mentor Connection with people in cities on this list, starting in the mid 1990s, with the goal that other cities adopt the T/MC strategy.  These include Rockford, Milwaukee, Detroit and Indianapolis.

Between 2000 and 2004 I developed a relationship with leaders at IUPUI in Indianapolis, that aimed to fully duplicate the T/MC in that city.  IUPUI never found the money to do that, but a show of their commitment was the hosting of an on-line conference (2004 or 2005) to parallel a Tutor/Mentor Leadership and Networking Conference in Chicago, and the rebuilding of the http://www.tutormentorconnection.org web site in 2005 by members of their technology department.

This strategy is still available to these and other cities. You can browse through my web sites and borrow the ideas. You can assign student research teams to dig into the sites and report what I'm doing that could be duplicated. You could hire me as a consultant.

You can do all three.

Posted by Tutor Mentor Connections at 11:20 AM 2 comments: 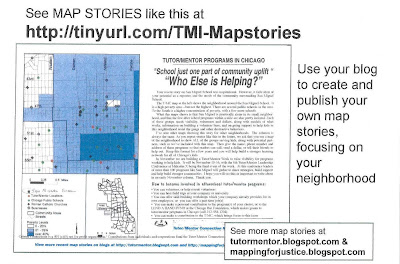 One of the challenges to solving complex problems is building and sustaining public interest and involvement. Most non profits, particularly smaller ones, don't have advertising dollars to use to attract attention the way most for-profit businesses do. Thus, one strategy piloted by the Tutor/Mentor Connection in Chicago, in the mid 1990s, is to create map-stories, that follow negative news, and point to places where volunteers and donors are needed to support tutoring, mentoring and learning strategies. I've modeled this by dozens of articles on this blog and the Tutor/Mentor blog. However, unless many others create their own map stories, and point links to me and others, we won't have the reach and frequency needed to build attention and motivate actions. Thus, this graphic is a reminder that you and anyone else can create and share similar map stories.

Here's a PDF essay that s hows how you can create your own maps.  If you're doing this, share your blog address in the comment section so that other readers can be inspired by the work you are doing. Below you can see another map created by the Tutor/Mentor Connection in the mid 1990s with text that shows how we have been trying to use maps to draw support to tutor/mentor programs in high poverty areas of Chicago.  It's a strategy that can be duplicated in any city. 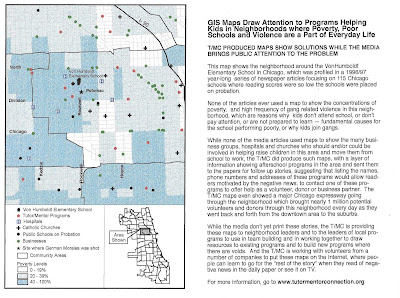 Here's another PDF essay, showing how you can create map stories following stories in local media that are drawing reader attention to problems caused by high poverty and too much inattention from people who don't live in poverty.

If you're a writer, artist, or YouTube creator, I encourage you to hack my articles and create your own interpretations, sharing them with me, and with your own network.

Posted by Tutor Mentor Connections at 3:15 PM No comments: 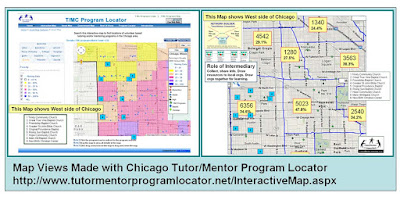 If you want to use Chicago Police District boundaries as your base map, here's a link to the City of Chicago site.

Here's a link to a map showing Chicago Police Beats.

Thank you to Josh Kalov for sharing this link on a #chihacknight page.
Posted by Tutor Mentor Connections at 2:09 PM No comments: