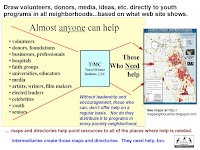 Since 1993 I've been trying using maps to help people form "partnerships and connections" that lead to a greater and more consistent flow of resources into every high poverty area of Chicago. One result would be a broader range of K-12, non-school, tutor, mentor and learning programs.
Maps can be used to focus attention on places where people in Chicago need extra help. They provide answers to questions like “What neighborhoods are affected?” And, “What indicators show these areas need this government and philanthropic support?”

Below are some examples of how maps can be used. In this case I'm focusing on the Opportunity Zones announced in January 2019.

The Opportunity Zone map is shown at the right in the following graphics. In the first map I've used a demographics mapping site  to show Chicago. The green color shows areas with a high density of African Americans. By comparing the O-Zone map with the one on the right, you can see that the Opportunity Zones are targeted to help this sector more than others. 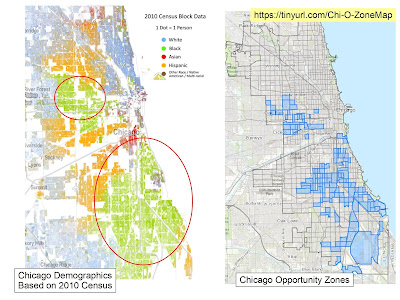 This next map shows the Chicago Tribune “shootings tracker” site, which shows locations of Chicago shootings for past 365 days. There's a definite overlap with O-zones but there are other areas which also need investment. 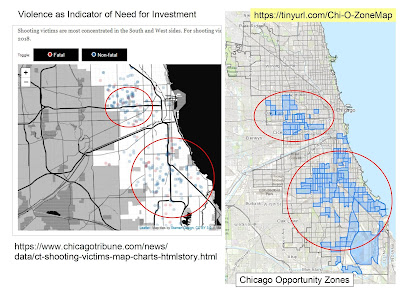 The next map comes from the Casey Foundation's Community Opportunity Map which shows poverty levels in Chicago (and other parts of the country). Using the interactive map you can focus in on specific parts of the city, and generate tables of information. For instance, I created a view focused on the North Lawndale area. 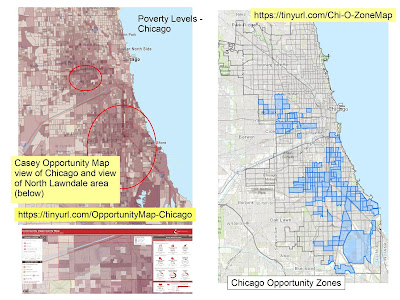 This next set of maps shows non-school youth tutor and/or mentor programs in Chicago, based on a list I've been maintaining since 1994. While most of these are not-profit centers that would attract Opportunity Zone investment, they are part of the mix of youth and family support organizations needed to help bring a neighborhood out of deep poverty.


A closer inspection of my map would show the wide range of programs on the map, and the lack of these programs in many of the O-Zone areas.

So who are some of the potential stakeholders and resources already in these neighborhoods? 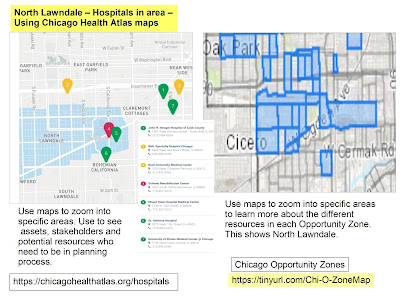 Hospitals can be employers, can be customers for products and services produced locally, can provide needed health services, and can be conveners who bring stakeholders together. They can also be leaders who help comprehensive youth tutor/mentor programs grow in the area. Using the Chicago Health Atlas you can also create maps showing health disparities, which are indicators of investments needed in different areas of Chicago.

In the concept map below I point to the platforms I used to create the maps I've shown. These are just a few of the growing number of data mapping resources becoming available over the past few years.


Creating, maintaining, and motivating others to use these platforms offer many challenges. Among these are:

a) Motivating and teaching people to use the various platforms to create maps that focus a story on specific places. That's what I did in the above maps.

b) Locating the different platforms with needed information can also be a challenge, at least from a time perspective. In many cases the data-maps are no longer on-line, so when I open a link it is a dead end. Unless people are really motivated, most won't do the digging needed to put together an effective map story.

c) Building public awareness so more people look at the maps, use them in planning and action steps that bring people together and drive needed resources to non profits and growing businesses in specific areas is also a challenge. People creating the map platforms usually don't have advertising dollars to do the communications needed to attract people to the maps, or to teach others to use the platforms to create on-gong map stories.

These data resources are not profit centers. Thus, they don't qualify for investment zone capital. One role of philanthropy, or other government resources, could be to support the development, constant maintenance and updating, and long-term use of platforms like this.

There are already a variety of community planning resources. Why not use them to guide investment? LISC Chicago as an example of this.


@LISCChicago & others already have comprehensive community development plans for many #Chicago neighborhoods. What will it take to motivate investors to dig into these and look for financing opportunities? #LiveAtUrban #opportunityzones
— Daniel Bassill (@tutormentorteam) January 17, 2019

Below is a screenshot is from one of 27 quality of life community plans developed under the lead of LISC Chicago. It shows the Austin Community area. All 27 can be downloaded at this link.


I don't include it on my data map because it's in a PDF, and not an interactive, on-line map (according to LISC Chicago). Thus while it's a great map, it's only useful to those who have access to it. You can't add layers, or zoom in, to focus on specific areas, or turn it into stories. There may be other map platforms like this in Chicago, or in other cities. I'm always adding to my library and this concept map. Send me links if you have them.
Another resource that can be used is the Chicago Public Schools Locator map. Below is a screenshot that I created using the CPS Locator platform. I shared it and others in this blog article. 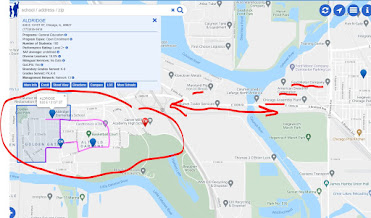 In my own efforts between 1994 and 2011 I tried to build one platform that would provide many layers of information that could be used to support neighborhood based planning intended to make more and better youth serving programs available in high poverty neighborhoods.


The map of the left was created using  the Interactive Tutor/Mentor Program Locator's Asset Map section. (It's no longer functioning properly, although still can be seen on-line archive at this location.)

While I've been collecting and mapping data since 1994, for most of those years I was dependent on volunteers and donated software. In 2007 a $50k anonymous gift, combined with a grant from HSBC North America, enabled me to re-build our in house mapping platform, and to build the on-line interactive platform.

Using ARC GIS software we could create maps showing layers of information and using the interactive platform, we enabled others to create similar maps. Below are two examples. You can see more like this in the MapGallery created in late 2010. 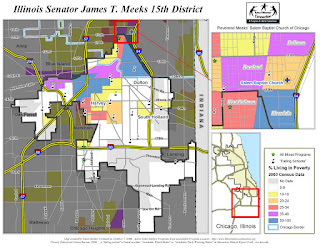 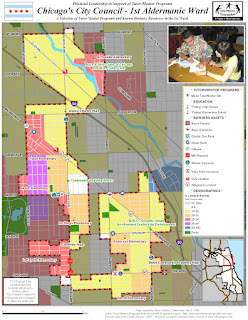 Unfortunately, the recession, starting in 2008, dried up funding for this by mid 2010.  I've not had funds to update this or create these maps since 2011, and it would take a significant investment to rebuild my capacity.

Yet, I feel it is needed because I don't find any other mapping platforms combining all the layers I was trying to combine, and building it into blogs and on-going communications, so community planners could show the need, show existing service providers (and/or businesses) and show assets in, and around, the community who should be involved in any planning process.
I wrote an article last year showing the layers of information needed on a platform like the Tutor/Mentor Program Locator - read it here.

I also added an interesting article about building relationship networks to support philanthropy. You can read it here.  Such networks could be using the mapping ideas I've been sharing.
Last year MacKenzie Scott made a massive contribution to help fund 116 organizations (see here list). This week she did it again, and one of the recipients was MENTOR, The National Mentoring Partnership.
Following last year's announcement I created this graphic, with the goal that she and others would make a long-term commitment to support the growth and operations of well-organized, long-term, tutor, mentor and learning programs helping kids in poverty from birth to work.  Maybe the MENTOR gift is a partial response. 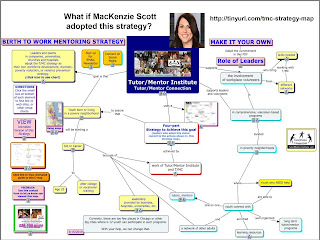 Thus far I've not seen MENTOR or any other youth development organization use maps the way I've been, in an effort to draw funding and volunteers into every high poverty neighborhood.  Thus, if you're  researching places where you can make a difference, perhaps you can read some of the articles on my blogs then share them with others who might want to become the investor, partner or benefactor who rebuilds the Tutor/Mentor Connection and its on-line mapping, and makes it freely available for others to use in Chicago and cities around the world.
Or, you might be a creative social entrepreneur who can figure out how to generate revenue and profit from this, so we could seek capital investors from programs like the Opportunity Zones program.

I'm on Twitter, Facebook and LinkedIN. I'll look forward to connecting with you.
Posted by Tutor Mentor Connections at 11:02 AM No comments:

Below is a screenshot of the MyChiMyFuture Chicago youth programs map. This is Mayor Lightfoot's initiative aimed at reaching more Chicago youth with non-school programs.

The map is interactive, with multiple categories of service providers. You can create map views showing single, or multiple categories. You can zoom into smaller sections of the city. And you can click on each icon to find program name, address, and website.  This is all good.
However, there is no sub category for "tutor, or tutor/mentor".  If programs from the list I maintain are on this map, they would be included in the "academic support category".

I've participated in MyChiMyFuture meetings since 2019 and have posted a series of articles on the Tutor/Mentor blog. I'm happy to see this map finally made public and hope that the Mayor and other public leaders will draw attention to it regularly in an effort to attract volunteers and donors to programs in every neighborhood.

So far it seems that the effort is aimed at youth and families, along with networking and training among programs.  Without driving operating resources to EVERY program, on a continuous, multi-year, basis, the initiative is unlikely to fulfill it's goals.

Hopefully the initiative will evolve to one with a purpose of drawing needed resources to every high poverty area of the city, brining ideas, volunteers, operating dollars, technology and youth participants to every program.

Posted by Tutor Mentor Connections at 12:07 PM No comments: