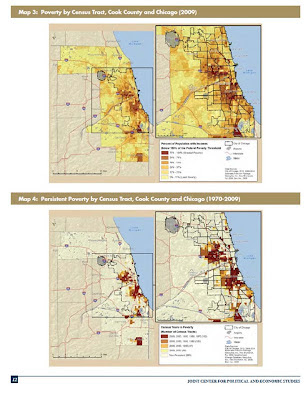 This is one page of maps from a report titled: "Place Matters for Health in Cook County."  I wrote about this on the Tutor/Mentor Blog.

In many maps posted on this site in the past few years we've shown how where you live influences what your opportunities are. This report further reinforces this.

This is an issue that should concern everyone in the Chicago region and in other metropolitan areas. Not just from a moral perspective, but from an economic one.

In the Executive Summary of the Place Matters report is this message: "A study released by the Joint Center for Political and Economic Studies in 2009 found that direct medical costs associated with health inequities among African Americans, Hispanics, and Asian Americans
approached $230 billion between 2003 and 2006. When
indirect costs, such as lowered productivity and lost tax revenue resulting from illness and premature death, were included, the total cost of health inequities exceeded $1.24 trillion".

If this concerns you form a learning circle in your faith group, college, business and read and discuss the report. No matter where you live on this map you have a role in changing what the map will show in the future.
Posted by Tutor Mentor Connections at 11:51 AM No comments: