This album shows some of the map stories created by Tutor/Mentor Connection since 1993 as part of a strategy intended to increase attention on volunteer-based tutoring/mentoring as a strategy for engaging more adults in a wide range of long-term efforts to help kids stay safe in non-school hours, expand their social capital, and keep moving through school toward jobs and careers.

In this article we describe how youth from many different schools, non school programs, colleges and faith groups could create their own map-stories, focusing on their own school neighborhood or community.

If you are already applying these ideas please share your web address so we can point to you and learn from you. If you'd like our help in developing this strategy, introduce yourself.

Posted by Tutor Mentor Connections at 12:14 PM No comments: 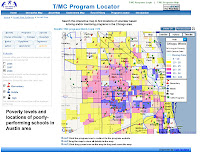 In 2008-2009 I was able to build an interactive Chicago Tutor/Mentor Program Locator Map/Directory that could be used by leaders in Chicago to help build and sustain mentor-rich, non-school tutor/mentor programs in high poverty neighborhoods. This image was created by combining layers of information showing poverty, poorly performing schools, existing programs and community assets, like banks then zooming in to show a specific part of Chicago.

We ran out of money in 2009 and have not been able to update the technology, or the content, in the years since then, except for keeping the information about tutor/mentor programs (the green stars) current.

One section of the Program Locator focuses on Assets, such as banks, insurance companies, faith groups, colleges, hospitals, etc. who could be strategically involved in supporting the on-going operations of tutor/mentor programs in sections of the city where they have facilities. 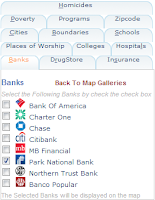 When we built the Program Locator in 2008-9 we included locations of eight banks. Since then some have expanded, and some have gone out of business, such as Park National Bank. Since I was not able to update the program locator myself, we've had to live with this outdated information.

I've had interns from Illinois Institute of Technology working with me for six week periods in Jan-Feb and May-June since 2006. On this page you can see work they've done to communicate strategies via various visualizations. 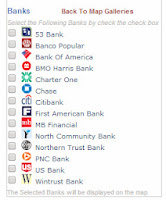 One of our Jan-Feb 2014 interns volunteered to look at the Program Locator, and after three weeks he has updated the Banks section, adding six additional banks and replacing Park National with one more. 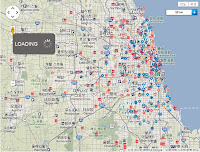 Now when you look at the Banks section of the asset maps you'll see a much richer range of banks. I hope that neighborhood groups and volunteer teams from the banks will use this information to bring together networks of business, non profit, educator, faith groups and other community assets and leaders to develop an understanding of the current level of tutor/mentor programs available in different neighborhoods, and to build on-going strategies to help existing and new programs constantly learn from each other and from effective practices around the world, so each program in every neighborhood of the Chicago region can be considered "world class" in helping kids through school and into 21st century jobs and careers. 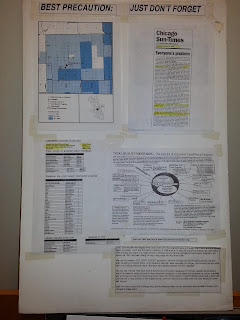 The purpose of the Interactive Program Locator is that when bad things happen in a city neighborhood, and get feature and editorial attention in the major newspapers, a map can be created showing where the incident happened, and showing businesses, hospitals, faith groups, etc. in the neighborhood who should be working together to make mentor-rich non-school tutoring, mentoring and learning programs more available in the neighborhood where the incident occurred, and in other neighborhoods with similar history. Until the interactive Program Locator was created in 2008-09 we were making map stories and displaying them like you see in this graphic.

If you're doing this work join us at the next Tutor/Mentor Conference to share what you're doing. If you're a business or volunteer who wants to support the Tutor/Mentor Institute, LLC's mapping strategies, introduce yourself on Twitter, Facebook and/or Linked in. Email tutormentor2@earthlink.net to offer your time, talent AND/or financial support to booster this effort.
Posted by Tutor Mentor Connections at 9:06 AM No comments: