Today the US Census announced that Illinois will lose one Congressional seat as a result of declining population in Illinois and growth in a few other states.  As I  thought about this I saw an article on the WBEZ website, showing maps created by the Center for Neighborhood and Community Improvement at the University of Illinois at Chicago. 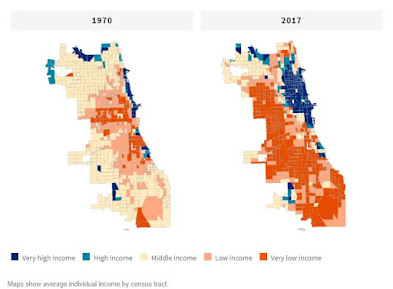 Whereas in 1970 there were large middle class neighborhoods in the North, SW and South sides of Chicago, not the city seems starkly divided between wealth and very low income.

While the low income area grew dramatically this does not mean the population of poor people grew. African American population within Chicago has been declining for decades. This 2019 UIC Great Cities Institute report states that "Since a peak measured in 1980, Chicago’s Black population has declined steadily from 1,187,905 in 1980 to 797,253 in 2017, a decrease of 390,652 or 32.9%."

This 2018 article provides more information about the migration of Blacks out of Chicago, to the suburbs, other cities in Illinois, and out of state, perhaps to some of those states gaining Congressional seats. It includes a quote saying, "Experts from the Urban Institute predict that by 2030, Chicago’s African-American population will shrink to 665,000 from a post-war high of roughly 1.2 million."

Posted by Tutor Mentor Connections at 5:44 PM No comments:

If you skim through articles on this blog you'll see that I've piloted uses of maps to guide the distribution of resources to youth programs in high poverty areas of Chicago  since 1993.

The Tweet posted below points to a WBEZ article pointing to The Mapping COVID-19 Recovery Project, a collaborative effort of 25 major Chicago foundations, nonprofit organizations, and public and private groups.

A new community project aims to guide future investment in Chicago, particularly as Black and Latino communities begin their recovery from the impact of COVID-19 — through maps. https://t.co/Lbg0zxkyjK

WBEZ is doing some outstanding mapping. It's an example of what's possible if you have the talent and dollars needed to create the maps and share them via various media channels.  I encourage you to read the report, visit the Recovery Project website, then help draw attention to the places where the maps show people need extra help.
Posted by Tutor Mentor Connections at 10:11 AM No comments: