Don't "ride by" poverty. Get involved.

In the May 13, 2013 issue of Crain's Chicago Business a map was shown of Metra transit routes through the Chicago region, connecting people with the downtown business district and the places where they live.  The intent was to show how some routes go through wealthy communities and others through poorer communities (I think).

I created a map analysis, using this image, along with one that the Tutor/Mentor Connection had created a few years ago.  On the left is the map from the Crain's article and on the right is one showing Metra routes along with major expressways. 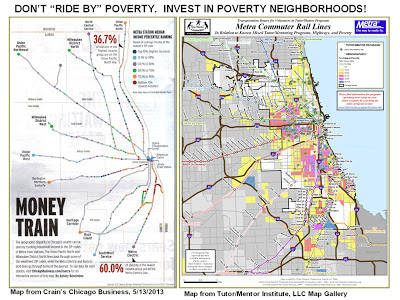 The first time I  used this maps was in 2009, in this article titled "Don't Drive By Poverty, Get Involved."

That was four years ago. I've been creating maps since 1993. My goal is that leaders in business, media, politics, religion, universities, etc. would use the maps to mobilize others in an on-going effort to build and sustain mentor-rich, non-school programs IN EVERY HIGH POVERTY NEIGHBORHOOD, where youth would be safe during non-school hours and would find an extended network of adult support and learning opportunities intended to help them go to school every day better prepared to learn and succeed, while also building a network of peers and mentors who would help them through school and into jobs and careers in future years.

I've been collecting information about Chicago area non-school tutor/mentor programs since 1993 and share it in a map-based directory and in this list of program web sites.

I've shared my thinking on a daily basis in blog articles, like this one, and in web pages, comments on media articles, web forums, and conferences I've hosted in Chicago every six months since May 1994. yet I find few reaching out to support the map-making and information collection/sharing that I do, or who are adopting these mobilization tools in their own efforts. 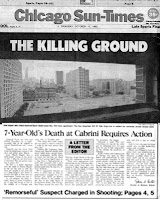 This was the headline of the Chicago SunTimes in October 1992. It said "7-Year-Old's Death at Cabrini Requires Action".  Chicago and other cities are still waiting for leaders to become strategic, using maps and other available data, to build the on-going systems of support that might result in more kids finishing school and going into Chicago area jobs and careers rather than dropping out and/or getting involved with gangs and the state's prison system.

Take a look at some of these leadership ideas. Form a Research & Development team in your company, faith group, college, etc. to study this information and offer strategies you can adopt.

If I can  help you with these please connect with me on Facebook, Twitter or Linked in.
Posted by Tutor Mentor Connections at 11:16 AM No comments:

Include this strategy in your efforts to help youth in poverty

Since 2005 interns working with Tutor/Mentor Connection in Chicago have been creating graphics and visualizations to communicate our strategies in new ways, and to new audiences. Below is a presentation created from this pdf, by Byeonghui Kim, an intern from South Korea. Past presentations can be seen here and here. View this page to see how interns learn what the strategies are as they go from first day on the job and through their internship period. Students in high school and college, as well as volunteers in different industries, could be creating similar presentations and using them to mobilize resources to support birth-to-work mentoring strategies in every city in the world. If you'd like to be part of this project, introduce yourself on the Tutor/Mentor Connection forum.
Posted by Tutor Mentor Connections at 10:14 AM No comments: