Barack Obama told an audience in Mt. Vernon, Iowa last year that:
“Your own story and the American story are not separate — they are shared. And they will both be enriched if we stand up together, and answer a new call to service to meet the challenges of our new century … I will ask for your service and your active citizenship when I am president of the United States.”
His platform's focus on "Service" has been brought up a lot in recent weeks, and promises to be a focus of future political strategy.
While Obama is busy campaigning for the Presidency at the moment, many Democratic U.S. Representatives are already serving as elected leaders, and are entrenched in positions where they can be unifying figures in his/her districts, serving to organize and promote service-oriented programs such as Tutor/Mentor Programs.
I would like to focus on the Illinois 7th Congressional District today - currently represented by Congressman Danny Davis - as another example of how the Tutor/Mentor Connection's (T/MC) maps can be used as tools to help politicians and their constituants work to create strategies that promote the development of tutor/mentor programs. 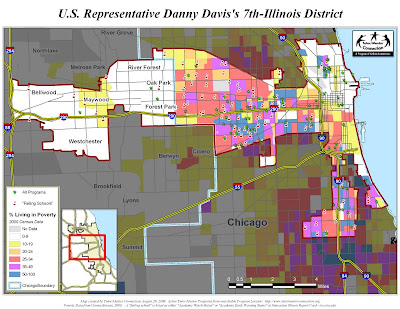 Similar to Illinois Sentor Emil Jones, Congressman Davis works with a constituency that is split between city and suburban voters. This Chicago border marks a clear division between the highly impoverished West side, and the relatively affluent near west suburbs.

Notice how commuters use the Eisenhower (I290) expressway, daily, to get downtown, bypassing the heavy poverty areas along the way. Commuter trains such as the CTA's green and blue lines also provide east-west access through the heart of the 7th District.

There is a noticible tie between "failing" schools and poverty visible on this map. Pockets of failing schools represent areas where students need more tutoring/mentoring than they are receiving. This has been looked at in detail in a recent blog. Fortunately, highways provide access for commuters interested in "service" to volunteer or make donations, in support of tutor/mentor programs in these areas of high poverty.

Descriptions of these individual tutor/mentor programs (green stars on the map) can be found using the Tutor/Mentor Program Locator Database. 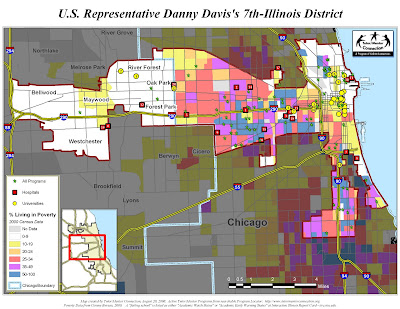 Imagine that each hospital or university on this map is hosting learning circles, with the organizations' leaders actively developing engagement strategies to reach youth throughout the entire district. For more information, please review the presentation for the Tutor/Mentor Hospital Connection. 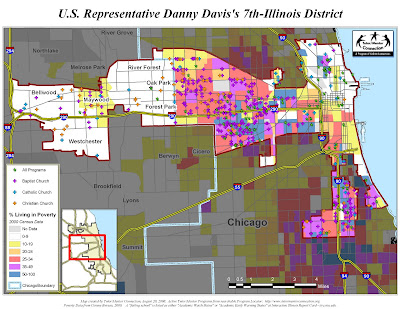 As discussed in the blog on Chicago's Places of Worship, the Tutor/Mentor Institute has a document called "How Faith Communities Can Lead Volunteer Mobilization For Tutor/Mentor Programs, detailing how "churches in affluent suburban areas, as well as in inner city areas, can be delivering sermons on a regular basis, that tie scripture and service, and point members to tutor/mentor programs that already exist, or to neighborhoods, where new programs need to be created."

Here we look at Baptist churches, Catholic churches, and other "general" Christian congregations in the 7th. 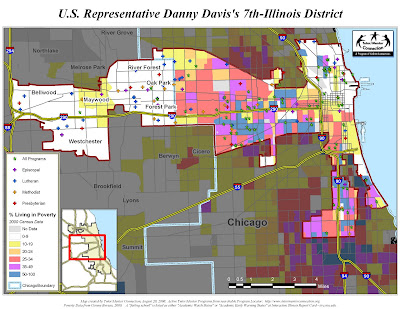 And here are the Episcopal, Lutheran, Methodist, and Presbyterian churches in the district. Again, each of these locations represent sites where congregations can meet to learn about tutoring and mentoring, and where church leaders can evangelize to get donors to contribute to the growth of programs.

In general, I am hopeful that these maps can be used as important tools by leaders throughout Chicago who share the T/MC and Barack Obama's interest in "Service," and that hopefully a high powered political figure like Danny Davis can take a look at them, help mobilize other public and private leaders in his district, and build additional support needed for tutor/mentor programs.

I should mention, if it's not clear, that these maps are not intended to show where service work is, or is not occurring. They are also not meant to endorse, or criticize elected leaders. The voters should make those decisions.