Media Reports "SW Side teen first CPS student fatally shot in '09"... The Rest of The Story...

The Chicago Tribune and Sun-Times each ran stories last week that brought attention to the "1st CPS student killed in 2009." The Tribune has since pulled its article from its archives, but the Sun-Times story still exists as of this posting.

As usual, the story breaks our hearts. And fits a pattern. Usually goes like this:

Young man or girl with big dreams, shot by another teenager. Often the student is living in high-poverty areas of the South or West Sides. Often, the media proposes ties to gangs (which the family often denies in the article.) And almost always, they make a point of telling us that he/she is a student at a Chicago Public School. It's been sort of trivalized - like a game: Counting and posting the number of 'CPS Students Killed' ... versus simply reporting "Teen with high potential shot" or something more human. But I digress.

So anyway, this particular Sun-Times article reports a few of these predictible details...

...That 16 year old Johnel Ford was shot in the head about 4:30 p.m. on February 12, 2009. It occured on the 5900 block of S. Campbell. And that he was "a 'funny, smart, intelligent' kid who had a natural mechanical ability, ... and wanted to go to college." But he had made some "enemies" lately. The Tribune article (that, again, wasn't archived for some reason) added that Johnel had run into trouble at Gage Park High School (near his home and the sight of the shooting) and had recently transfered to Robeson. This Trib article reported that another group of young men opened fire when confronted by Johnel's cousin for unknown reasons. The bullet missed the cousin and hit the unintended victim, Johnel, who was in the wrong place at the wrong time.

Johnel could have been in a tutor/mentor program at 4:30pm on a Thursday afternoon instead of on the street, perhaps receiving guidance from an adult mentor... working toward his college dreams.

What if an article actually mentioned this?

What if the Sun-Times showed a map that told the "rest of the story," and explored potential tutoring-/mentoring-based solutions?

Here is my "The Rest Of The Story Map" (As always, be sure to click on the map to see an enlarged version): 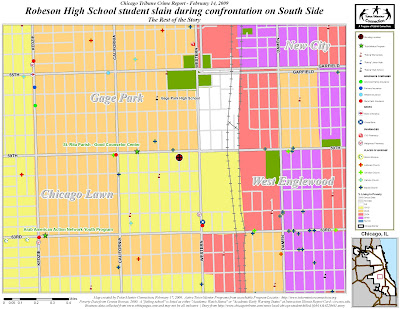 Perhaps if people saw this map, and a reporter initiated a discussion of tutor-/mentor-related solutions, people would start asking questions!

For starters, what are those two tutor/mentor programs doing in the neighborhood to promote their service to students like Johnel? Did he even know they were available for him? Maybe they offer a safe place to get tutoring, work on computers, talk about life with adult mentors, or simply meet and befriend other college-bound peers at 4:30pm on a Thursday?

And really, how extensive are the services the programs offer? How could Johnel learn about them?

Lawyers Lend-A-Hand lists the programs on their master list but doesn't necessarily support them, and it becomes even less clear to me how "quality" these programs are when I try to check out their websites. Unfortunately one program doesn't even have a website that could give Johnel info about its services. The other one gives an indication on its site that they are active and offer one-to-one volunteer-to-student mentoring, but doesn't give as much detail as a great site like, say, East Village Youth Program about what the program offers a kid like Johnel .

With this said, I am making an educated guess that these programs (like all programs that rely on volunteer/part-time help, and operate on shoe-string budgets) can use help getting the word out to the kids on the streets, and to potential volunteer tutor/mentors.

So my next questions is, looking at available resources in the 2 square mile area around the crime...

What are business leaders doing in the neighborhood to support these two existing programs?

As we've seen in other blogs, the mass-market retailers, banks, and insurance companies here (in concert with other businesses that aren't mapped) can use strategies on the Tutor/Mentor Institute to collaborate efforts and build alliances that recruit volunteers, pool money, and post program info for the community to see.

And of perhaps greater importance, who is working to add NEW program options for the students living here?

Commonly, programs have a maximum capacity of up to 75 students. Assuming these two programs are operating at this capacity (and knowing that there are far more than 150 students living in this area), it's easy to determine that this is a region in Chicago that has an urgent need for new quality mixed tutoring/mentoring programs.

Spirtual leaders can help here, perhaps opening their doors to host new programs. They can also help by preaching the benefits of tutoring and mentoring to their congregations, raising awareness for students and parents, while simultaneously creating enthusiam and promoting sense of community. The Tutor/Mentor Institute has a document that deals with this specifically, called "How Faith Communities Can Lead Volunteer Mobilization For Tutor/Mentor Programs."

Oh, and state and federal politicians who serve this area's constituents can request custom maps like the one I created for the 5th Illinois Legislative District, to use in conjunction with strategic documents from the Tutor/Mentor Institute, in order to facilitate/lead the entire support/creation process.

Call me optimistic, but it's my feeling that we can find a way to reach more underachieving students who are currently living in high-stress situations... students who have dreams that perhaps seem inaccessible... get them off the streets... and give them the direction they need to get to college, become responsible adults, and contribute to the revitalization of our communities.

We can work together to provide the tutoring and mentoring support that can save the life of a Johnel Ford, and groom his talents for the improvement of society as a whole.

Email ThisBlogThis!Share to TwitterShare to FacebookShare to Pinterest
Labels: crime

Today's paper reported 3 teens killed on the SouthEast side of Chicago and another shot in the head in another neighborhood. This is a war zone, but too few people who are not affected are deeply involved.

I can understand part of this because of how people in every economic sector struggle with the economy, the war, care for elder parents and young children, and the stresses in their own lives.

But one therapy for stress is to focus attention on helping others. Volunteering in a tutor/mentor program, as a leader, donor, tech support, trainer, tutor or mentor, is a way to focus on other people's problems, and thus make your own seem just a little smaller.

Thanks for the maps and stories Mike.

disclosure: Mike works for me at the Tutor/Mentor Connection and creates these maps. However, he has complete editorial freedom in the articles he writes.