I have to admit... I was somewhat skeptical when Cabrini Connections Research and Networking Coordinator, Nicole, told me over a bunch of Martinis last year (at our Martini Madness Fundraiser event) that she was going to start training to run the Chicago Marathon... with funds raised going to Cabrini Connections and Tutor/Mentor Connection (T/MC).

I mean, it was after a bunch of Martinis after all!

And look how long the route is! 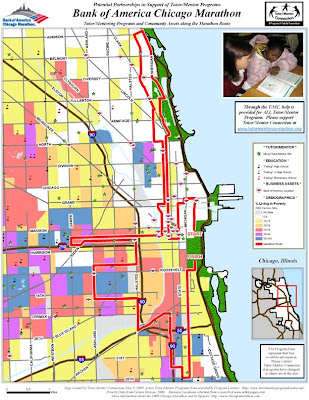 If you are interested in seeing all Bank of America Locations in the city, and reading about how they and other banks could be using T/MC Strategies to support student programs, check out this blog I wrote almost a year ago.)

But back to Nicole's story!

Sure enough, after sobering up, she stuck to a training regimen all year, raised $2,757 for her favorite charity, and then somehow got up at an ungodly early hour last Saturday, to run 26.2 miles through the streets of Chicago... smashing her goal of 5 hours by over 15 minutes. 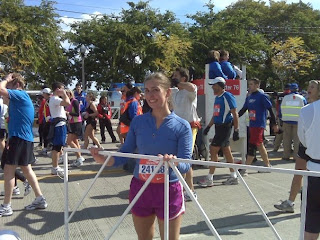 How inspiring is that?

But get this - she's still not done! Take a peek at her blog this week to learn how you can still contribute to her fundraiser, because as she says, "Even though the race is over, we still need to keep Tutor/Mentor Connection running!"

She also discusses a couple other coming events and contests that will help you get involved with our Tutoring/Mentoring cause for Chicago's students.

Email ThisBlogThis!Share to TwitterShare to FacebookShare to Pinterest
Labels: events

Thanks Mike! You're pretty awesome yourself!