The Rest Of The Story: "Girl, 7, critically injured in Southeast Side shooting"

This evening at 5:02pm, I saw a "Sun-Times Media Wire" report: "Girl, 7, critically injured in Southeast Side shooting."

They could only provide a few initial details, of course:

The girl was shot at 4:13 p.m. at East 80th Street and South Manistee Avenue, according to police News Affairs Officer Veejay Zala.

The girl was reportedly shot in the head, according to a source.

I decided to see how long it would take me to map the crime location... with a dream in my head about a day in the future where The Sun-Times or another media outlet would want to include a map that showed which resources and which mentor programs were available near a crime scene... revealing those working to SOLVE crime in the high-poverty neighborhoods they routinely feature.

Here's the map I was able to produce in under an hour: 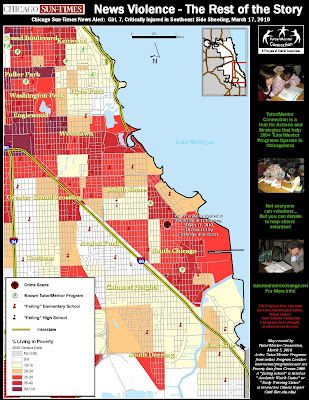 Click on it to expand it if you want.

Now I understand that "the news is there to report facts, not editorialize," as I've been reminded by several journalists. (Even though the website immediately opens the "Reader Comments" Forum on a story with no details, to potential editorializing, misinformation, and hate from the faceless masses.)

But there have to be people like me and you who simply want to know how we can get involved and help solve a problem when we see one. That's not editorializing. That's providing information.

With sponsorship and collaboration, we here at Tutor/Mentor Connection could further develop our infrastructure and show an even clearer, mappable, picture of community resources available to people working (or needed) in these neighborhoods, and to those of us who want to help.

We already have the foundation in place (in fact, go to the interactive version of our map data, to make a map similar to the one I made above in half the time!)

We just need you to get involved and use it.

And please do not kid yourself by thinking you live far away from "that sort of thing," and that "those people" are not your concern. Find a few minutes to read about how violence and other "costs of poverty" affect you, the taxpayer.

It's no wonder politicians on both sides of the aisle, alongside business leaders like State Farm Chairman and CEO Ed Rust have done their research and are convinced that mentoring is something that needs to be in the middle of any plan of attack against senseless crime... and the suffering that continues to bleed down to us all.
Posted by Mike at 5:48 PM