A slick new web site has been created to mobilize resources from the business community to fight the rising violence in many inner city neighborhoods. The Mayor is raising a pool of $50 million dollars to fund new initiatives that expand the number of youth reached. I wrote about this a couple of weeks ago on the Tutor/Mentor Institute blog.

On the Get IN Chicago web site is a map showing neighborhoods eligible for funding from the first round of this initiative. I created a map from the Tutor/Mentor Program Locator, showing levels of poverty, locations of poorly performing public schools (from 2008) and locations of non-school tutor/mentor programs that I've been able to identify. 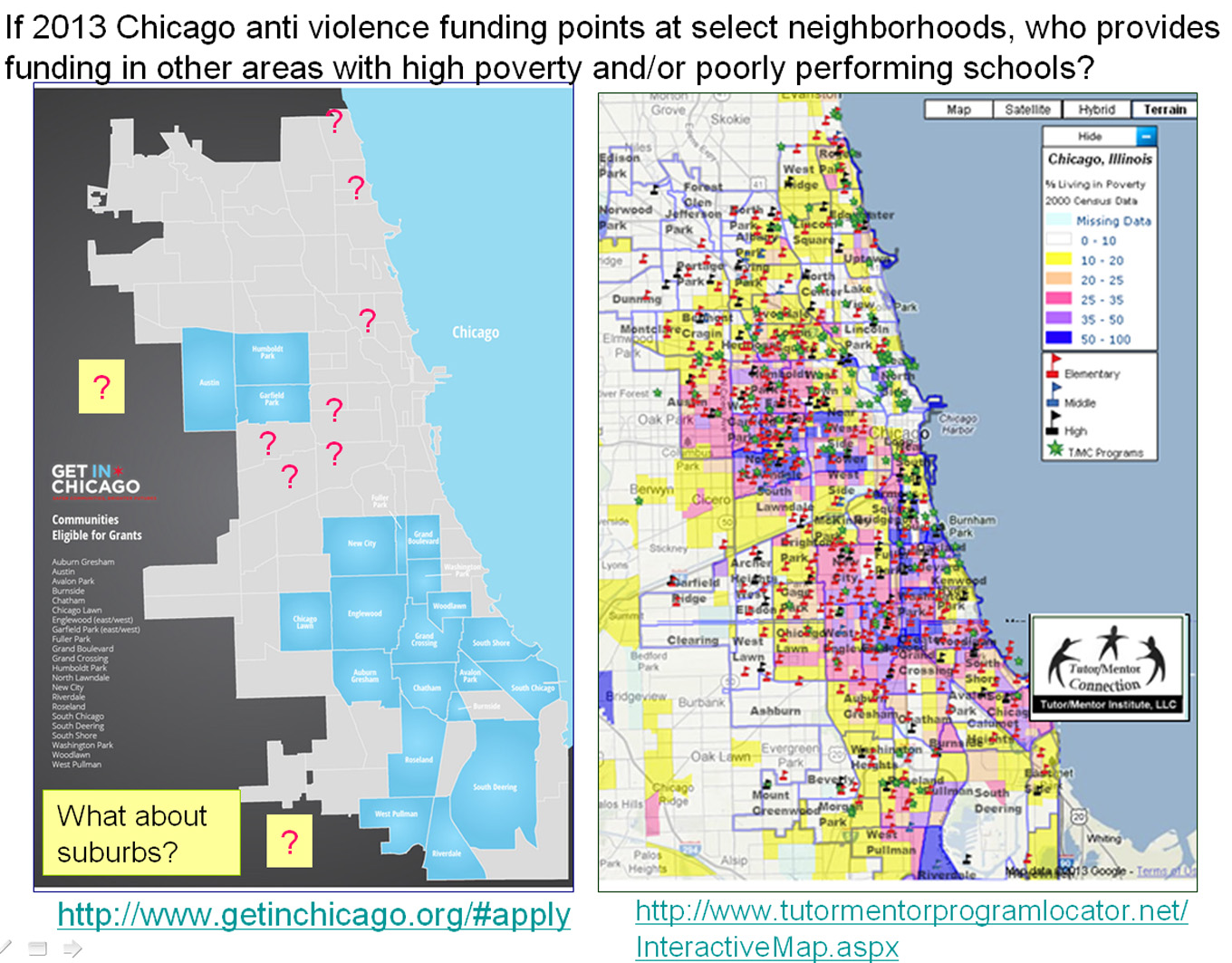 While the neighborhoods targeted for funding certainly have a need for youth serving programs, there are other neighborhoods that also need these programs, including areas of the suburbs that don't come under the Mayor's umbrella, but certainly are affected by high poverty, gangs, drugs, etc.

If you look at the Tutor/Mentor Program Locator map, you'll see that there are not a lot of existing tutor/mentor programs in the areas where funding is targeted. If you look at the web sites of existing programs, you'll also find that too few show comprehensive strategies, theory of change, or multi-year history of success. That means new and inexperienced programs will compete for this money, and that it will take time for these programs to grow to be great in how they influence youth habits, or how they build a cadre of loyal volunteers. That won't happen in a few months. Hopefully in two to three years when these programs are maturing, the money will still be there.

However, what happens to other programs in areas outside of this funding? Are companies going to just switch funding from programs they have been supporting to new initiatives the Mayor is supporting? Can we really expect them to put $50 million in new funding into this sector? A newly released 2013 Non Profit Finance Fund survey shows that non profits are already struggling financially. Without a flow of operating dollars to sustain current efforts, new money for expanded efforts sits on an empty shell.

The city and suburbs need a long-term strategy that mobilizes operating and innovation resources for many programs and supports volunteer, youth and donor connections for many years. It's needed this for more than 20 years, not just in the past two to three years. 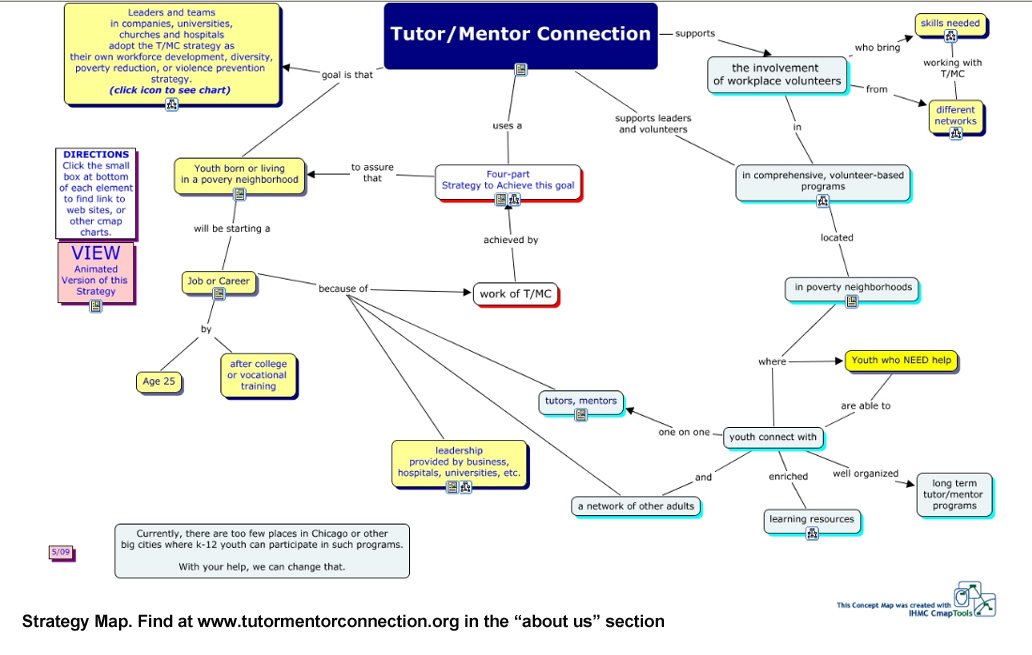 This strategy needs to use maps to support the distribution of resources and growth of programs. It needs to be based on libraries of information showing what programs are doing in different parts of the country, not just Chicago. And it needs to be supported by on-going public involvement advertising, education, evangelism, involving leaders from many sectors. I created this strategy map many years ago to show my own commitment to helping youth from the Cabrini Green neighborhood move through school and into jobs and careers. It shows a need for many leaders and many volunteers with different skills. It could be on the web site of any youth program, or on the web site of the Mayor and any business leader.

To me, that's the role of elected leaders. Use your influence to motivate leaders from every sector to adopt long-term strategies that help all kids in Chicagoland move through school and into 21st century jobs and careers. Use your web site to give recognition to leaders who adopt this strategy and showcase those who seem to do a little better than others every year. Create a Chicagoland competition to DO GOOD and compete with other major cities to show that Chicago leaders can do more good than they can.
Posted by Tutor Mentor Connections at 11:35 AM

Many tutor leader look to further study in order to develop themselves further. This can be using a coder through the college or university course. This sort of study will likely be impossible to find which you mature control submit even so the probability to include methodized manifestation for you do the job is usually priceless.