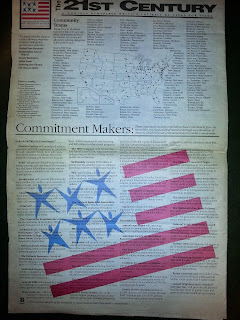 This is the back page of an 8 page newsletter that I picked up while attending the 1997 Presidents' Summit for America's Future event in Philadelphia. I was a Chicago delegate, and my organization, the Tutor/Mentor Connection (T/MC), was one of 50 Teaching Examples with booths at the Summit. I was hoping this event would launch a wave of reinforcements (talent, dollars, ideas, etc.) to support site based tutor/mentor programs in Chicago and other cities, as well as intermediaries like the T/MC who were collecting and sharing information, and organizing events, intended to draw these resources directly to tutor/mentor programs.

I tried to find this organization on the web site, but it no longer exists, at least under this web address. The organization supporting this effort is TeenInk.com, which you can find here. 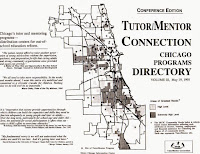 As you can see from this graphic I've been collecting information about Chicago tutor/mentor programs since before 1995, and have been using maps to show where existing programs are located as well as where more are needed, for just as long.

I've yet to see the President, Mayor, national leadership groups like America's Promise, etc. use maps consistently and for the purpose of drawing resources to places already operating, so each could constantly improve. Below is one of several illustrated essays I've created to show how leaders can, and should, be using maps. I sat next to General Colin Powel in a small Chicago meeting in 1997 or 1998 and tried to put some ideas about mapping in his hands at that time. Unfortunately, another leader (and former General) snatched the info from him. I doubt that he ever saw it.

No General Goes to War Without a Map by Daniel F. Bassill

If you're a leader, I encourage you to use maps in this way. If you lead a youth serving organization, or youth publication, encourage your teens and volunteers to create stories using maps, and calling on resource providers to fill high poverty areas with needed volunteer-based tutoring, mentoring and learning programs, as well as the talent, dollars and technology each program needs to operate, and constantly improve.

I'm looking for partners, sponsors, volunteers and a wide range of help to update my own mapping platform since I'm no longer operating as a 501-c-3 and have yet to figure out a business plan to generate revenue to support this work.

Here's the front cover of the publication that I point to above. 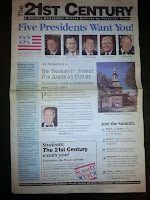 Five Presidents were featured and pledged to help the most at risk kids in America get mentors and find safe places to learn, play and connect during non school hours. Too bad none of them, or Presidents elected since then, have done this consistently, nor used maps in their own efforts to mobilize resources to support youth serving organizations.
Posted by Tutor Mentor Connections at 11:25 AM