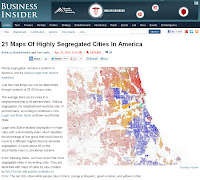 The New York Times has created an interactive map that maps segregation patterns in major cities, such as Chicago. Local activists should learn to use these and other data maps, in stories that draw more people into engagements that solve the problems shown on the maps.

Update: 11/21/2017 - Here's 2017 Brookings.edu article about segregation, titled "60 years after Brown vs Board of Education, how racially balanced are America's public schools?"  Look at the interactive map  to see racial mix for more than 86,000 public schools.

Update: 1/9/2018 -Here's article about school segregation in US cities. Title is We can draw school zones to make classrooms less segregated. This is how well your district does. Is your district drawing borders to reduce or perpetuate racial segregation?
Posted by Tutor Mentor Connections at 12:48 PM