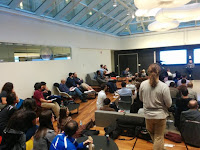 A few weeks ago I posted this photo, with a story about my attendance in weekly ChiHackNight meetings in Chicago.

Every week between 80 and 120 people attend and the event starts with a round of introductions. As this happens I'm impressed with the range of talent in the room, and frustrated that the introduction process does not lead to greater connections beyond what takes place each week.

I've begun to Tweet my introduction as an example of what I hope others will do.

Introductions at #chihacknight. I'm Dan. View my https://t.co/AjhEu0LmtE to see my interest in #maps
— Daniel Bassill (@tutormentorteam) May 24, 2016

Then, a couple of weeks ago I saw this message posted on the Slack group for ChiHackNight

alexsoble [6:42 PM] Feedback! Ideas! Questions! Here or (better! open!)https://github.com/alexsoble/chi-hack-night-intros/issues
I clicked into the link and found this graphic, and two others like it. 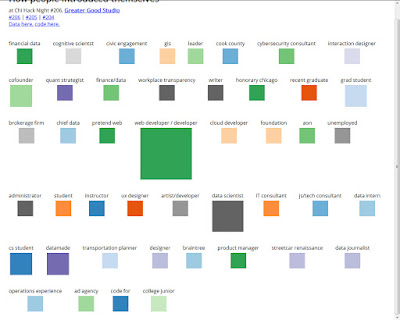 Alex Soble was thinking along the same lines as I've been, so as people were introducing themselves he was categorizing them on his laptop. After a few other steps, he created this graphic, showing the mix of talent in the room, and showing how some talents, such as web developers, are more represented than others.  You can follow what Alex did, and what value he thinks this offers, by visiting the link above.

I've been involved in hundreds of conversations over the past 20 years focused on solving the complex problems that face Chicago, and almost always we come to a point where we're talking about "getting the right people" into the conversation.  However, in most gatherings, I don't see attempts by organizers to map who is in the event, for the purpose of  understanding who else needs to be involved, or for the purpose of knowing if the group is growing from year to year, or if there is consistent participation by key people.

I've attempted to map participation in the Tutor/Mentor Conferences I've hosted since 1994. You can view maps here.  I created an on-line attendee list so people who attended could connect with each other.

I've posted dozens of articles focused on network building, learning and network analysis on the Tutor/Mentor blog since I started it in 2005. Here's one titled "Want to Change the World? Who is Helping?"

Knowing who is attending an event and what their talents are, or where they live in a geographic region like Chicago would be a huge first step in getting the right people connected and in giving voice to more people.  However, I want to take it a step further.

Below is a concept map that shows "talent" I seek to help me further the goals of the Tutor/Mentor Connection and Tutor/Mentor Institute, LLC.   I feel this could be a worksheet used by any organization.  If we can put names in each box, indicating someone dedicating time, talent and dollars toward that functional area, as part of a commitment to the overall mission, we'd probably be on the road to success if we filled most of the boxes. 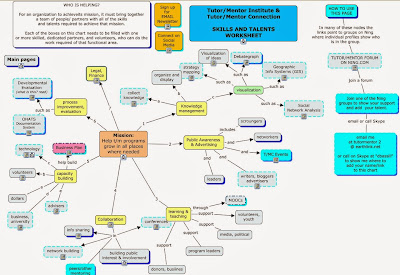 Thus, I hope people like Alex keep innovating ways to map who is in the room and that they will try to create a template that enables people attending an event to fill out a form as they register, so there is an automatic way to gather and report this information.

I was chosen as a client for an Information Visualization MOOC  hosted by Indiana University in 2015 and again in 2016. I described my goals in this article.  The 2015 team made some progress (see report), and no students chose my project in 2016. Thus, when I share articles like this I'm inviting some of the people attending events like this to add their own skills to this effort.

If we can make collecting and displaying this information easy and inexpensive, and convince higher profile organizers to embed this into their on-going activities, we could reach a tipping point where this becomes and automatic part of efforts to bring people together to solve big and small problems facing our communities.

You can find a library of links to articles about collaboration, mapping, visualization, etc. in this section of my web library.