Why I Created Tutor/Mentor Connection in 1993. Why I Still Lead it. 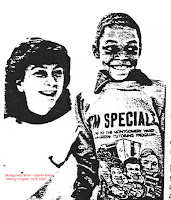 I started leading a volunteer-based tutor/mentor program in Chicago in 1975 while holding a full time retail advertising job at the Montgomery Ward corporate headquarters in Chicago.  I used many of my advertising skills to support a volunteer based that grew from 100 to 300 between 1975 and 1992, then to support fund raising in the years since then.

Over the years I saw many media stories talking about violence in Chicago, and editorials saying "we need to do something" but no strategies similar to how the corporate office supports hundreds of stores located all over the country. 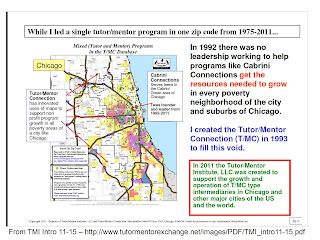 In late 1992 while forming a new non profit to serve 7th-to-12th grade kids who were aging out of the original program, I and the six other volunteers who were helping me, decided to fill the leadership void that I'd seen over the previous 17 years. We created the Tutor/Mentor Connection, to help volunteer-based programs like the one I had led, and the new one I was forming, get the resources needed to grow in all high poverty neighborhoods of the Chicago region.  All of the ideas and information on my blogs and web sites, created since 1993, focus on that goal.

I signed up to take part in the summer 2017 Connected Learning #clmooc group activities, and added myself to their member map today. I first joined this group in 2013 and over the past four years I've developed some strong idea-sharing relationships with people from different parts of the country and the world as a result.

I’ve been trying for the past 20 years to build this type of learning community, connecting all of those who are concerned with the gap between rich and poor in America, the education system, workforce diversity, social justice, violence, public health, and a number of other reasons to be involved. Some people talk about the "village" it takes to raise kids. I write about it and try to bring members of the village together.

As I wrote above, I started leading a volunteer-based tutor/mentor program in 1975 (see history) while I held a full time job with the Montgomery Ward company. While our program grew to include over 300 pairs of youth and volunteers by 1990, funding was not an issue because all of the leaders were volunteers.

However, in 1990 when I converted this program to a 501-c-3 non profit and needed to raise money to pay salaries for myself and others to stay involved, the funding of non profits began to become a real issue. Over the years I’ve aggregated a wide range of personal frustration on the challenges small non profits face in finding consistent operating funds, and I’ve built a library of articles that show how others think on this topic.

I illustrate my thinking visually so let me show some maps that I think many of you will find interesting, and useful.

This is a map showing nearly 400 foundation (corporate and private) in the Chicago region and Eastern part of the United States who I put on my mailing list between 1993 and 2005. 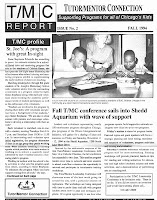 Every year I send copies of my printed newsletters to these people, showing why tutor/mentor programs were needed and what I was doing as a direct service provider, and as leader of the intermediary Tutor/Mentor Connection.

The green icons on the map are foundations that funded my organization at least one time. Few funded me more than 2-3 years in a row. Some, like Montgomery Ward, funded me for seven consecutive years, then went out of business, and thus were not able to continue their support. None of the grants was larger than $50,000 and most were in the $1,000 to $10,000 per year range. Some were for general operating expenses, which I could use flexibly to build the organization, while many focused specifically on activities of the Cabrini Connections direct service program or the Tutor/Mentor Connection. In total I raised more than $6 million between 1993 and 2011, with a peak of $500,000 in 2000. This money split with 40% funding the Cabrini Connections direct service program, 40% the Tutor/Mentor Connection, and 20% funding operating and fundraising expenses. With no multi-year commitments, each year since about 1998 I started from zero in raising $300 to $400,000 from a wide range of donors. 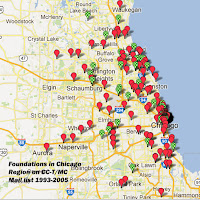 This map shows a close up of the Chicago region so you can get a better sense of how many foundations I was reaching out to.

My organization never had more than 3 or 4 people on staff, and never had a full time professional development officer. I was CEO, chief innovator, chief marketing officer, newsletter writer, grant writer, janitor. Yet every year I was challenged to write letters of introduction, letters of inquiry, grant requests, grant reports, each with different requirements and different questions. 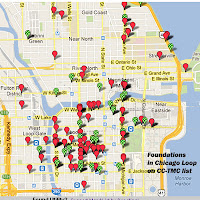 Yet we all were focused on helping expand the network of non-school hours support for inner city kids. By 1998 I was using web sites to show the work I was doing and what I was trying to do. 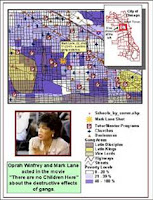 When I begin using maps I started following media stories about kids being killed in Chicago with maps showing where this was happening, and with links showing what tutor/mentor programs were operating in those areas, and what knowledge was available to community leaders, business and foundations, etc., so they would work to build programs that would provide more mentoring, tutoring and learning opportunities in more places. 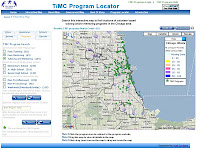 In 2008 the T/MC created a Chicago Tutor/Mentor Program Locator with maps that show where tutor/mentor programs are needed, and other maps showing banks, hospitals, universities and faith groups who are spread in different parts of the city, and who could be supporting the growth of programs in each of these areas.

I keep asking myself, "Why haven’t leaders in these foundations use my maps, or similar directories, to adopt neighborhoods, then adopt tutor/mentor programs in those neighborhoods and make long-term commitments to help each program become the best in the world by borrowing ideas from each other and using a constant flow of operating/innovation dollars and volunteer talent to implement these ideas?"   No good answers to that question.

Here’s an interactive version of the map of foundations. You can enlarge the map and zoom in and see the name and location of each. Some no longer exist since this list was last updated in 2005.

With more than 200 youth serving organizations in Chicago offering various forms of tutoring, mentoring and non-school support, we can have 200 development officers and/or Executive Directors reaching through this list to find foundations who will give them funds each year, which is a tremendous redundancy.

Or we can build strategies that educate and motivate donors and business partners to reach out and build proactive support systems for tutor/mentor programs in neighborhoods that need such programs.

I'm no longer hosting the May and November Tutor/Mentor Leadership and Networking Conferences, due to lack of funding. However, these could be started again, or we could build an on-line conversation, similar to the CLMOOC community, if partners and sponsors stepped forward to help.

This and other articles show why I created the Tutor/Mentor Connection in 1993. I still lead it, through the Tutor/Mentor Institute, LLC because no one else has created a similar 4-part strategy with the same aim at supporting the growth of mentor-rich non-school learning programs in all of the high poverty areas of Chicago.

We can do both. We can do better.
Posted by Tutor Mentor Connections at 10:49 AM