Excited to report that my first mapping project is in motion and my first deadline – mid-March – is fast approaching! Basically, my goal is to program a custom interface with which Dan, other volunteers, or perhaps even students can create maps – using ArcGIS – quickly and on the fly. ArcGIS (the mapping software) is pretty complicated and takes some training to use. The problem is that Cabrini Connections works largely through the efforts of volunteers and part-timers and there simply isn’t the budget to have a technician like myself here full time. No one else knows how to use the software very well, so I want to give them a simple and standard Windows tool that will help them be map-makers when I’m not here. This has to be "as done as possible" before I begin student teaching late March.

Why does Cabrini Connections need maps again? One of the big goals here is to raise community awareness about issues of social justice. But a larger goal is motivating people to join together to work for solutions. Everybody wants to see an end to poverty and crime and human suffering, right? Everybody wants safer neighborhoods, no? (Well I guess this is an assumption, but I’m betting the vast majority of people would do something if they could.) Cabrini Connections gives ordinary people an opportunity to do something. Like most tutor/mentor programs, Cabrini Connections pair students with volunteers like you and me… to provide mentorship for kids who are being “left behind” by underfunded schools and underinformed community, government, and business leaders.

So this thing about raising awareness in folks who might be willing to work for a solution... this is one situation where maps can come into play.

Let’s take an example: Here’s an article from this week’s Chicago Tribune: 2 teens shot while waiting for bus on South Side. Ok, so what do we learn from reading this? That Englewood is a dangerous place where kids get shot on the way to school. People read the story and probably think, “That's too bad. Poor kids.” And then they turn the page.

While this particular article has no maps, occasionally you’ll see a simple map attached to an article like this – one that shows the location of the shooting but not much else. Again, all we’ve actually “learned” is that someone was shot on the South Side. (Which we’ve been trained to expect of course, because after all, all we ever hear about the South Side is that “it’s dangerous.”)

But what if a map like this was included: 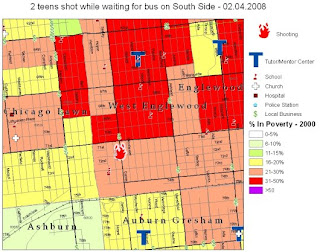 Perhaps someone now might take a second to think: “Whoa – look at that poverty around that shooting.” And maybe “Are those churches and businesses and schools in the area providing any after-school help for the kids in Englewood?” Better yet, “Who are those existing Tutor/Mentor Programs I see on this map? Do they know each other? Are they working together? Can I get involved?”

Maybe someone in the neighborhood will now take a leadership role after seeing a map like this. Maybe a community leader can stand up and ask “What do we have to do to get more people interested in the wellbeing of our neighborhood?”

Instead of simply saying “That's too bad another kid died” now maybe folks, combining the story from the trib with the map made here are saying “Why is there so much violence and poverty here, and what can I do to help address this?!”

So that’s where I am at – racing the clock to get this interface built before I leave to student teach… a custom tool that will make ArcGIS easier to use for everyone here in their efforts to help people identify problems... and then find solutions to the problems.
Posted by Mike at 2:05 PM

Email ThisBlogThis!Share to TwitterShare to FacebookShare to Pinterest
Labels: crime