Ulysses Simmons: Murdered for His Bike

Last week the Chicago Sun Times reported that a young man - 14 years old - was shot on the far South Side.

It was the first day of summer vacation -- cool, not too hot -- a perfect day to hang out with buddies on the block and flirt with the girls.

That's what 14-year-old Ulysses Simmons was doing Monday, friends said, when a white car circled the South Side block for the third time, disappearing around the corner.

As they scattered, one 14-year-old boy was shot in the shoulder. Friends said Ulysses, who had been sitting on his beloved bike talking to one of the girls, fell to the ground, clutching his stomach.

The Burnside boy, an eighth-grader at Beasley Academic Center, was mechanically inclined -- he could fix almost anything around the house and on the car, even radios and computers, his grandmother said. He is the first Chicago Public Schools student slain over the summer break.

Not gang-banging. Not causing trouble. A smart kid with a supportive family and a bright future, shot in a high-poverty neighborhood for his bike. Unfortunately, anyone who has been within earshot of the news this summer knows that Ulysses' story is all too common, and that kids in Chicago are being killed at an unprecedented rate this year.

I'm going to start trying to keep up with the local media's negative news, mapping at least one event weekly to explore the possible relationship between the bad stuff happening in town and poverty/resource availability. For example, here's a look at last week's Simmons murder: 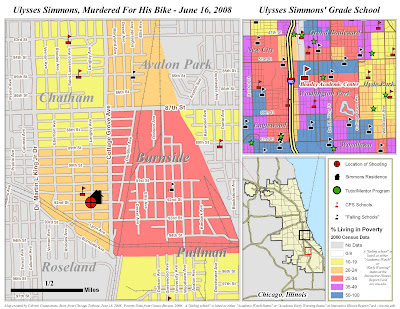 So, what does a map like this show us? Dan Bassill, president of The Tutor/Mentor Connection (T/MC), explains in his blog:

T/MC maps will show the degree of poverty and locations of poorly performing schools in neighborhoods where the media point their bad news spotlight. The maps also will show locations of volunteer based tutor/mentor programs, if any exist. For instance in the map above, there are no volunteer based tutor/mentor programs (that we know of) in the neighborhood where the shooting took place, and only a few in the area around the school this boy attended.

In essense, these maps will try to fill in gaps - a supplement, if you will - to the news outlets who provide the stories. A common theme we'll be developing is, "Where are the resources in our city where volunteers and donors can lend a hand?" Hopefully these maps will also serve as a visual directory of resources/institutions (churches, banks, businesses, schools, hospitals, etc.) that can work side by side with new and existing Tutor/Mentor Programs to help mend the poverty gap, reducing the frustration and hopelessness that occasionally lead to anger and violence.

(I should mention that, this past week I finished compiling a thorough "Chicago Public Schools" dataset that includes demographic and performance indicators - which I am very willing to share with anyone who is interested in such data. The next goal is to research and compile extensive data pertaining to "Places of Worship" and "Businesses.") 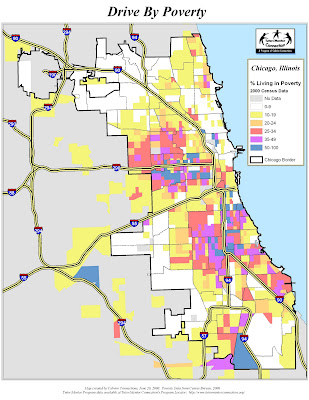 And lastly, the maps will attempt to show just how easy it can be for people to exit the highway and volunteer their services for a few hours each week. As we've seen recently, one has to look no further than Cabrini Connection's year-end dinner to see how normal working people - people who commute daily through high-poverty neighborhoods - can make a difference in kids' lives.

Recently I heard a good question posed. "Why in the world would anyone want to get off the highway and go into a high-poverty neighborhood where there is frustration and potential violence?" (As though there are entire neighborhoods of muggers and gangbangers just waiting for someone to wander off the highway.) This is probably a common fear for potential volunteers who, ironically, are victims themselves of the hypersegragation that poverty has created among all Americans, and who share more common interest than difference when you strip away the ignorance that comes from not knowing someone. Fact is, there are people working in these neighborhoods - in schools and churches and businesses and tutor/mentor programs who recognize that the future of the city - our economy and our well-being - can be positively affected by helping all kids become better-educated leaders. In fact, one might argue that there is more risk in NOT spending a few hours each week getting to know these kids and their families - ultimately shedding ignorance for ALL parties, and mentoring future leadership. (This, again, is what many volunteers at Cabrini Connections rave about when asked about the experience. Many have been quoted at saying that they may be taking more out of it than the kids.) What these maps will eventually do is show the different groups and resources working in Chicagoland to fight poverty.

I welcome you to continue to visit this blog to look at our maps this summer, I would also like to draw your attention to our map gallery, where all past, current, and future maps will be on display.

Well, I would like to inform that there are organizations which are doing great to help the needy. United Nations is one such organization which has initiated a campaign to End Poverty by 2015. The campaign revolves around 8 major goals which, if accomplished, would ensure eradication of poverty. By the way, the campaign also has a community http://www.orkut.co.in/Community.aspx?cmm=47234928 .

@ ayesha I visited that community its a really good one .I ll let all my friends know about this.Thanks anyway.

What a great post. Informative and well documented. The map looks great! Ideally, the Tutor/Mentor Connection program of Cabrini Connections aims to make sure youth like Ulysses don't continue to suffer this kind of conclusion, by helping tutor/mentor programs across the city access the resources necessary to keep their doors open so that they can keep the good kids doing something constructive with their time, and hopefully get the volunteer man power to get the not-so-good ones interested in something cooler than violence.

Keep up the good work!

i knew ulysses because we went to school together and i feel that it is very sad that he had to lose his life the way he did.