One of the more heart-wrenching stories from this past week involved an 8 year old boy, who while sitting with his parents in a van, on a Monday evening in Humboldt Park, was shot twice during a drive-by. Speculation in subsequent stories was that the gunmen were targetting his father in a gang related incident, and that Josue Torres was just in the way. He told doctors and nurses at Stroger Hospital - much to the delight Chicago Tribune headline writers - that, "You guys have been so nice to me. When I die, I'm going to miss you." Doctors ultimately saved the boy and the story captured the imagination of the entire city.

Of course, many people know that Humboldt Park is a tough neighborhood, and likely aren't too surprised to hear another violent news story come out of the West side. If I can editorialize (of course I can - it's my blog :), you have to sort of suspect that if there wasn't a really cute and brave kid involved with this story, that the majority of people (as well as the news) would have just shrugged it off. "Big deal - they're all hoods in Humboldt Park." Of course, the truth is that most people in Humboldt Park are concerned about their families, their kids, and their communities. Most people are looking for solutions to the poverty, the violence, the frustration.

My job is to look deeper than the surface... past the details the Tribune provides... and look at the work that concerned people and organizations are doing to mentor and tutor kids in neighborhoods like Humboldt Park, so that down the road, kids grow into adults with the skills needed to vanquish the poverty gap, ultimately curbing violence and making all our communities safer, economically healthy places to raise a family.

Ok so with that said, here is a map of Humboldt Park. 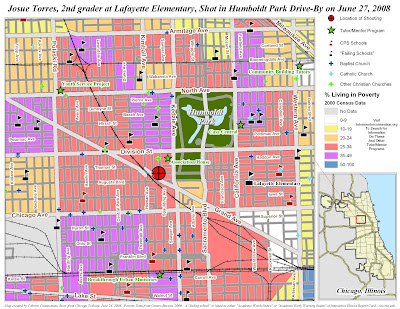 It shows 2000 Census poverty tracts, tutor/mentor resources, school resources, and "places of worship" (new data that I've recently begun to collect, and am showing off for the first time.)

Several things strike me as I look at this map. First off, again, how many potential volunteers and donors drive past the West side of Chicago every day? Looking at the inset map, commuters race back and forth on the Eisenhauer and Kennedy expressways daily, to and from work. Major roads such as Western and Grand take commuting Chicagoans inches away from the kids who are suffering from the effects of poverty and associated segregation. How can they help?

Look at the map again. There are five organizations within reach of Joshue and his classmates that work to provide services to kids and their families:

(Five organizations is a good start of course, but there needs to be more. Perhaps people involved with these schools or these churches can take an active role in supporting or creating new organizations? But that's a slightly different story. Let's focus on these five existing organizations for a minute.)

Each of them are multi-service programs that work to support kids and families in their community. Each have been identified by the Tutor/Mentor Connection's Program Locator as organizations that may have tutor/mentor programs (although after visiting their websites, I notice that only Breakthrough Urban Ministries and Community Building Tutors specifically speak of "tutoring" and "mentoring" programs). And certainly each have volunteer opportunities available. While some volunteer opportunities besides tutoring or mentoring are likely to exist - and these services are important and worth your time - our goal here at Tutor/Mentor Connection is creating more T/M programs like the one in place at Cabrini Connections, and ultimately creating a network of volunteers who are fighting at the front lines in the war against poverty by mentoring kids who will eventually abandon the call of the street and take up leadership roles in America's social, economic, and political arenas.

If you are at all interested in dedicating a small amount of your time with an organization please take a few minutes to contact them and see what kinds of volunteer or donor opportunities are available at any of the five organizations listed above, at Cabrini Connections, or at a program near you.