Colleges and Universities and Poverty

Last week, students and professors from Madison, Wisconsin's Edgewood College took a yearly summer trip down to Chicago to spend a few days with the kids at Cabrini Connections. Edgewood College's mission statement says that they are "committed to building a just and compassionate world" and that their identity revolves around "open, caring, thoughtful engagement with one another and an enduring commitment to service, all in an educational community that seeks truth, compassion, justice and partnership." From the Cabrini Blog, we see that these teachers set up "several large and small group activities at [Cabrini Connections] that focused on positive self esteem, building confidence, and positive communication. The group also had the opportunity to take part in activities around Chicagoland."

The Edgewood-Cabrini collaboration provides a perfect example of how a typical university's philosophy tends to fit hand-in-glove with the goals of tutor/mentor (T/M) programs - each reaching out to work for social justice, aspiring to close the learning and poverty gaps, and (importantly) educating tutors/teachers as well as students.

In fact, a quick look at mission statements from most universities and colleges in Chicagoland seem to suggest that this sort of partnership should be natural and regularly-occuring. I notice that every university I look at espouses the belief that institutions of higher education need to support the community and build partnerships. They also seem to unanimously believe, on some level, that a fundamental purpose for education is to work for social justice and equal educational opportunity.

DePaul University, for instance, (point # 6 on my newest map below) "emphasizes social engagement and service to others," and has "formed lasting partnerships with community organizations." Sitting just north and east of many struggling communities, I imagine that DePaul would be interested in supporting programs like Cabrini Connections (located a quick 7 to 10 minute bus ride south, down Halsted) . 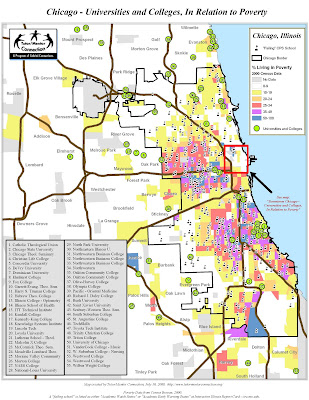 Looking south of DePaul, the prestigious University of Chicago (#51) and six other institutions of higher learning sit on a virtual island in Hyde Park, surrounded on all sides by poverty and failing schools. U. of Chicago recognizes that they are indeed "uniquely positioned to contribute to, and draw from, the strength and diversity of this world-class metropolis." Almost begging to work with T/Ms, they write that, "At Chicago, campus and community are interconnected in partnerships that serve both to support the community and train future policymakers, social workers, artists, and social and political leaders."

Northwestern University's president reports that "the second year of the Chicago initiative, an effort to reach out to the African-American and Hispanic communities in the Chicago area ... has been going very well" and states that he wants to"offer our students the opportunity to learn in a diverse community, thereby preparing them better for their careers. This is particularly true in the 21st century, when the United States is becoming increasingly diverse and the working world increasingly globalized." As we see on the map, opportunities exist for Northwestern (#35) to reach out to T/M programs in impoverished areas of Evanston itself, as well as to the south in the Rogers Park community of Chicago, where Loyola University (#21) lists among its 5 characteristics of Jesuit Education, "learning and leadership in openhanded and generous ways to ensure freedom of inquiry, the pursuit of truth and care for others."

The University of Illinois - Chicago (UIC), is located just west of downtown (#27 in the expanded downtown map below), and sits almost like a gateway on I290 to West Side poverty. Like the others, UIC promotes a goal of providing "a wide range of students with the educational opportunity ... to address the challenges and opportunities facing not only Chicago but all Great Cities of the 21st century." 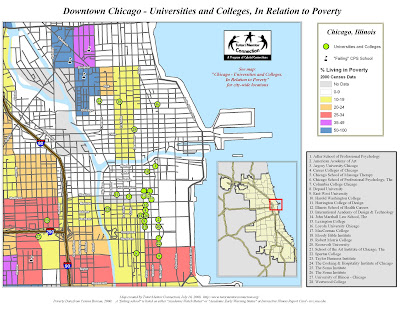 Dan Bassill writes in his blog this week that, "if you're at Northwestern, or Loyola, you could have a great impact on the growth of programs in the North part of Chicago and in Evanston. While if you're at the University of Chicago, you could have an impact in helping tutor/mentor programs grow throughout the South Side where our maps show so much poverty and too few tutor/mentor programs."

One only has to look at this map, and combine the universities' existing philosophies and proximity to impoverished areas, to see how easily this can happen.

The major universities all have some degree of mapping capacity. I hope our maps challenge them to create their own maps, showing places in neighborhoods around their campuses which are growing resources helping kids to careers, because of the way the university helps them get leaders, volunteers, ideas, training, technology..... and operating dollars.

I just stumbled upon this website while doing some research, and I'm so happy to see this! I have just completed a project proposal for a competition, Members Project '08, sponsored by American Express which I've named "The Phoenix Project." Please check it out and share with your readers. And vote, if you can! I may be contacting you to find out more about the Tutuor/Mentoring Connection, since it's exactly the kind of thing I'm proposing. I should have figured other thinking people would notice the proximity of these great colleges and universities to some of our most impoverished area in the city. Good luck and keep up the good, difficult, necessary work! (please visit: http://www.membersproject.com/project/view/FIXNXD)