I'm in the middle of an ongoing discussion with Jim Cory and some of the other map makers on the Tutor/Mentor Connection GIS team about a sort of conundrum that affects us as map-makers, educators, and Tutor/Mentor program advocates. We need your help. 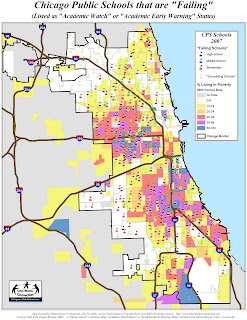 A few days ago, Dan Bassill came to me and asked if I could take the data I collected from Interactive Illinois Report Card's database, pertaining to "failing schools" (schools on the IIRC's "Academic Warning" and "Early Watch" lists), and display them against a backdrop of poverty. I've done this sort of thing before, but this time he wanted to see them categorized by grade-level ("High School," "Elementary," etc.)

(I should take a second here to point out that I am certainly no authority on the math behind "failing schools." In fact, I've asked several people - including teaching and administrators - how this works, and how schools are chosen for these warning lists... and no one seems to know for certain. So again, I'm no guru here by any measure. I only know what I've been told by some folks who work in the schools, and by what I've learned from the IIRC website. If anyone knows FOR CERTAIN how schools are determined to be "failing," I would love any feedback. This would help me make better maps for sure. 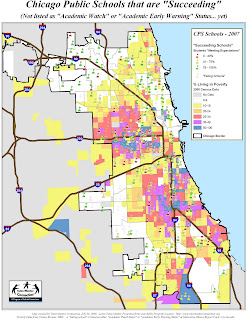 But then I had a brainstorm and decided to play a little bit here, using some of the other data I have. For these "succeeding" schools, I looked at their "% of Students Exceeding Expectations" data (which is apparently one of those variables used to determine "failing" schools). Learning that schools need to be above 40% for this particular variable, it makes sense to assume that schools that are currently not "failing" but are below 40% "Students Exceeding Expectations" are surely on the path to warning lists and state sanctions.

In other words, instead of saying "look at all these succeeding schools," I think the map now shows that the "succeeding" ones in the impoverished neighborhoods... the ones not meeting expectations... maybe they just haven't been tagged "failing" yet, and maybe they're on course to get that tag soon. 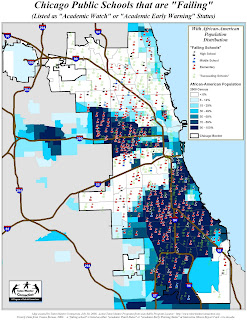 So I'm already playing with assumptions, but here's where it gets real hairy... Dan came to me next and asked to see the "failing" school data against a backdrop of neighborhoods' racial makeup.

This is easy enough. I just took the 2000 Census' population numbers and calculated percentages within tracts. I also created a flag in the data that tells me which racial group constitutes a tract's "majority." (I have these new data for all of IL, IN, WI by the way, if anyone needs them.)

Looking at the resulting map, it's pretty hard to miss all that segregation... "hypersegregation" in fact... isn't it?

Having read Douglas Massey's book "American Apartheid: Segregation and the Making of the Underclass," which lays out in great statistical detail how segregation and poverty are unmistakeably tied to frustration, rebellion, and failure... and having seen with my own eyes (through the work I've done in a high school which is located in that chunk of navy blue on the West side, and here at Cabrini Connections and Tutor/Mentor Connection) how smart the kids really are and how well they respond academically to tutoring and mentoring...

Surely, everyone knows this all to be true, right? 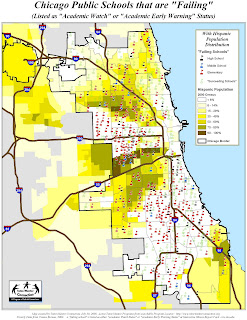 Not so fast, warned Jim. "When I look at the race distribution maps," he noted, "I think that we need to be careful about the message we convey. Are schools poor because the majority of students are minorities?"

I hadn't thought from that angle. But damn it, I bet that is the conclusion people will draw, isn't it?

Of course that's not what I want to convey... or what I know to be true. (I'm extremely appreciative for the different perspective Jim was able to provide here, and would ask all of you to drop me a line whenever you have advice or concerns. This can and should be a very open discussion as the project grows.)

Any rate, Jim sent me something else to consider, an empirical study on "High Poverty-High Performance (HP-HP) Schools" by the research division of the Illinois State Board of Education back in 2001. Therein, researchers compared "High Poverty-High Performance" (HP-HP) schools to "High Poverty-Low Performance" (HP-LP) schools (the latter of which surely apply to many of the "failing schools" where African Americans and Hispanics are concentrated). The report searches for answers as to why some schools in these areas are actually "succeeding" (HP-HP).

Of course they determine that there are many factors, none of which (including race of course) are singularly responsible for poor overall school performance. School size, teacher salary, student mobility, teacher education... all of these were cited as quantitative variables that can be looked at. (In fact, I have some of this data, and could make maps that show these variables.)

But the report also cites qualitative factors such as "time and energy spent by teachers," "teacher outreach to parents," and "student sense of responsibility." How do you measure student and teacher motivation? I can't map that! Can I?

As Jim asks, "What other kinds of influences affect success? Can we map them? I think if we look deeper at the problem we will find complexity, but also compelling reasons for people to mentor."

And this is precisely the question we're stuck on here at Tutor/Mentor Connections.

This week the Chicago SunTimes is doing a series on the impact of violence on the social and emotional lives of kids. You can find the 8/06/08 article here: http://www.suntimes.com/news/education/1093215,CST-NWS-prisoner06.article

I think if we create an overlay showing violence, not just the killings of 36 kids, and perhaps another showing gang territory, we've begin to see how the combination of poverty, racism, and violence work against the kids in these areas.

Our aim in creating these maps is not to point out poverty as a problem, but to enlist volunteers and donors from business, churches, colleges, hospitals, etc., in areas beyond poverty, to take growing responsibility for helping tutor/mentor programs start and grow in these areas.