Haiti: What Are We Learning This Week?

Between June 2001 and and the beginning of this past week (over a span of nearly 9 years), the Chicago Tribune wrote about Haiti fewer than 100 times. Last year, Trib writers made just about 20 mentions of the island that everyone is talking about this week.

As I write this blog today, nearly 200 articles (and counting) have been written in the Trib about this week's major earthquake and ensuing natural/humanitarian Haitian disaster, which is partially due to that country's history of neglect and poverty.

Trib writers are furiously pumping out articles about Haiti's history alongside sponsored links where you can make donations to relief organizations. The articles detail up-to-the-minute reports of relief shipments and volunteer troop arrivals... case studies of individual suffering and of the heroes who are lending medical and rebuilding assistance... sports figures taking moments of silence with their fans in arenas throughout the U.S.A... celebrities and politicians using their influence to raise money... businesses donating astronomical sums... and about people like us who are responding via our cell phones and social networks to raise millions ourselves, a few bucks at a time. (AP photo by Ramon Espinosa / January 15, 2010)

Of course, this is all quite literally awesome.

But where was the attention before this week?

Why does it always take a catastrophe of "biblical proportions" (as I saw one headline stated earlier this week) to motivate people to learn (or care) about poverty, suffering, and corruption... and to then take action?

Because as many Americans are learning this week (guided by newly interested media and political leadership), the suffering in Haiti didn't begin on Monday.

"Haiti" is the #1 result on Yahoo's "Trending Now" list as I write this. Many Americans are surely running into essays like this one, published in 1986 by THE HAITI PROJECT, which details historical/colonial "root causes" of poverty... but also looks at "more immediate causes of poverty" in Haiti, such as a neglected and insufficient school system (leading to illiteracy problems); unemployment and an underdeveloped workforce; and a "self-defeating image of themselves... a self-image [that] creates its own cycle of misery." 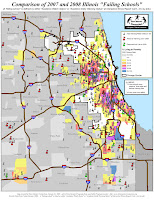 I'll stop far short of comparing exact reasons for Haitian poverty to those of American poverty. Clearly there are huge differences in histories and available resources. But equally clear, there are some obvious similarities.

See this article for a look at "The Core of the Problem" in the United States, which features a look at the book American Apartheid, by Douglas Massey and Nancy A. Denton. The book is rooted in statistics and history, and details how hyper-segregated high-poverty American neighborhoods have been systematically neglected by politicians and others... and how generation after generation, families in these neighborhoods have faced unique barriers to resources such as jobs and education... and that their political and spatial isolation, combined with generations of hopelessness and frustration have created not only anger, but - as the author argues - alternative value systems and a self image that occasionally get the kids in trouble.

Now, by no means do I want to diminish the magnitude of this Haitian disaster, the suffering, and the need for you to take action and make a donation to a relief organization.

But again, I can't help but wonder what it is about human beings - who are so clearly compassionate in times of disaster - that prevents them from consistently addressing suffering before the suffering is tied to a catastrophe?

I ask you to read about poverty in the United States and get involved to address the physical, economic, and social suffering that is happening right here, right now, in your backyard... suffering that might affect you whether you feel it or not.

I urge you to then lean on people you know, or who represent you... people in positions of political, media, and business power... to create preventative leadership strategies that incorporate tutoring/mentoring as a part of the plan of attack.

What will it take? A catastrophe much closer to home?

Tutor/Mentor Connection is at the forefront of knowledge/data collection, strategy building, and tool provision for anyone who wants to get involved in the fight against poverty through volunteering, donating, or building alliances in support of non-school tutor/mentor programs.

Mapping For Justice is a department of Tutor/Mentor Connection, and offers state of the art map tools for leaders to use in developing plans of action, to mobilize available resources and find new resources that will provide mentor-to-career assistance for students in every neighborhood.
Posted by Mike at 1:17 PM

Email ThisBlogThis!Share to TwitterShare to FacebookShare to Pinterest
Labels: poverty

Mike, if we can innovate a way to draw daily attention to information about poverty, tutoring/mentoring, and other social issues, with the same success broadcasters, sports shows, and reality shows do, we would be one huge step toward helping resolve some of these problems.

I've not figured out the solution yet, but one part is using the media we have to write stories like you and I write, using maps to point to the places and the information that people can use to get involved, and stay involved.

For those reading, Mike and I both work for the Tutor/Mentor Connection. We use our blogs to attract volunteers and donors to our program, and to all other tutor/mentor programs in the Chicago region.

If you're a writer, or techie, or marketing guru, why not volunteer some of your own time writing stories like these, or passing on what Mike and I write to people in your own network.