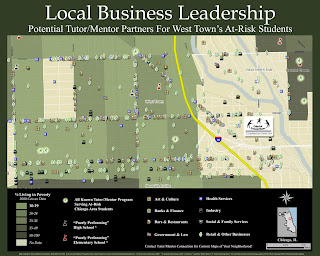 I became interested in making maps, originally, because I recognized their power to help students visualize their world around them. I was looking for a social justice tool I could use in my classrooms while teaching history and civics to underprivileged inner-city youth.

In the three years I've been making maps for Tutor/Mentor Connection (T/MC), to help build programs that help students everywhere, I’ve come to understand that mentoring doesn’t just help the students. It helps you and me in ways I had never considered. My new challenge has become convincing those who are living comfortably that poverty and poorly-performing students might be their concern too. And that my maps can help all of us if they fall into the right hands.

If you haven't already tuned me out, let me continue by saying I understand your apprehension. Like many "successful" Americans, you and I share an industrious work ethic, are pretty competitive, and have worked hard to earn our achievements. So on some basic level, I understand the befuddled look when I suggest you should invest in others who haven’t "earned theirs."

On the other hand, let's talk about a sluggish job market and a fickle economy. These are issues that we should be talking about, right?

Here’s the thing: All of this – uplifting the poor, our current economic woes and America’s economic future - while not exclusively related (after all, there are a myriad factors that play into our economic mess), aren’t completely unrelated either.

So here's another attempt at grabbing the attention of "successful" Americans everywhere by showing how poverty probably affects even you.

First, note empirical “cost of poverty” reports that have estimated the costs to the U.S. associated with childhood poverty at $500B per year, or the equivalent of nearly 4 percent of GDP.

The Alliance for Excellent Education further estimates that high school dropouts from the class of 2006-07 alone will cost the U.S. more than $329 billion in lost wages, taxes and productivity over their lifetimes.

Just yesterday, AP Business Writer Pallavi Gogoi reported on the nasty phenomenon of companies outsourcing/offshoring more and more American hires and resources, writing that corporations might simply be going to where the markets are booming. “Sales in international markets are growing at least twice as fast as domestically,“ he reports, and “by 2015, for the first time, the number of consumers in Asia's middle class will equal those in Europe and North America combined.” Jeffrey Sachs, globalization expert and economist at Columbia University, attributes this shift, in part, to the improving "quality of the global workforce," explaining that "we are not fulfilling the educational needs of our young people,” and emphasizing that "what's changed is that companies today are getting top talent in emerging economies, and the U.S. has to really watch out."

Honestly, I never set out to find these connections between students and our economy when I first went down my “mapping for social justice” path. It’s becoming clear however, the more I search for ways to justify what I'm doing with my maps, that I’m not the only one talking about this emerging relationship. Business and political leaders are starting to make noise about tutoring and mentoring as part of long-term comprehensive plans toward making America's markets more competitive.

State Farm Chairman and CEO Ed Rust encourages his employees to volunteer to help students because, “as a business leader, State Farm knows first-hand that graduation is a critical first step to future success for our students and future prosperity for our nation.”

The late Senator Ted Kennedy introduced and passed legislation encouraging "more organizations across the Nation, including schools, businesses, nonprofit organizations and faith institutions, foundations, and individuals to become engaged in mentoring" citing research and strong evidence "that mentoring can promote...an increased sense of industry and competency, a boost in academic performance and self-esteem, and improved social and communications skills."

Locally, Urban Prep Charter Academy for Young Men, in impoverished and gang-torn Englewood on the south side of Chicago, has put a mentoring program to action, and helped turn107 of 150 incoming freshmen (who were reading at a sixth-grade level when they arrived four years ago) into four-year college students, preparing them for our workforce and as new consumers... instead of potential tax burdens on our streets, in our welfare lines, and - in worst case situations - the correctional facilities we all pay for.

T/MC maps can help business leaders and policy makers who are interested in this connection between our economic well-being and tutoring/mentoring programs by exposing where at-risk youth live, and where new programs, like the one at Urban Prep, might be needed in their neighborhood or political district.

The maps can then be used by these community leaders to rally support from the business community for the programs that do exist. For example, the map at the top of this post (click on it to expand) showcases the poverty, schools, and all business assets in Chicago's West Town neighborhood, where Cabrini Connections tutor/mentor program operates.

Cabrini Connections can use this map to find potential partners that want to connect employees with kids in local schools, to influence reading, writing, critical thinking, and learning habits, and then build long-term relationships with the students to ensure more youth from neighborhoods like West Town are working in their companies, or are their customers, when the kids are adults.

Now I'm no economist, but it seems to make common sense the more I read, that if this investment in mentoring was happening in every neighborhood at maximum capacity, we could put a dent in the costs of poverty to us taxpayers, while potentially offsetting some of the growing economic disadvantages that are emerging and causing American companies to take their business elsewhere.

Contact us to customize a map for your needs...

And if you feel T/MC mapping technologies are important...

We at Tutor/Mentor Connection (T/MC) have spent the past several years using maps to identify and analyze areas of our city where support for at-risk youth needs to grow, in order to make our students brighter, our workforce stronger, and our streets safer.

We operate on a non-profit budget and rely on donations and charity to continue our work, using state-of-the-art GIS technologies in support of our community-based mission.

Please consider a small tax-deductible donation to this important charity this holiday season.