“We can’t have a city divided or a people divided...We must make sure Chicago’s future is brighter.” - Carol Moseley Braun 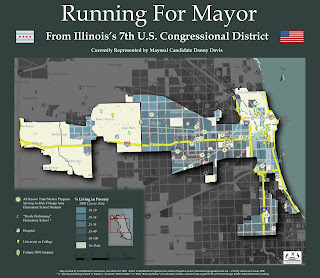 U.S. Congressman Danny Davis and Reverend Senator James Meeks have pulled out of Chicago’s mayor’s race, and are now endorsing Carol Moseley Braun, in the upcoming battle for Chicago’s top boss. Their collective battle cry revolves around “unity.” I can only hope "unity" is a policy-related concept, as much as it may be useful in consolidating votes.

At our map gallery in November, we featured maps that provide birds-eye views of Congressman Davis’s district, as well as Senator Meeks’s district, in an attempt to show how Tutor/Mentor Connection (T/MC) maps could help Chicago’s next mayor -whomever it may be - become better equipped to address voter concerns such as education, crime, and economic challenges.

(These gallery maps are only samples by the way, and similar maps showing relationships among community resources - or lack thereof - could be easily be customized to the specific needs of any elected official or community leader. )

Carol Moseley Braun, as Chicago’s next mayor, would obviously face the same challenges as Davis and Meeks. Using a map similar to the Davis map above (click to enlarge), she too might visualize where businesses and other community resources such as hospitals and colleges are operating, in relation to poverty and existing support systems for at-risk youth (such as tutor/mentor facilities). She could then allocate resources, or facilitate unity among community leaders, as she sees necessary.

She might also notice where highways cut through the city, in relation to poverty and poorly-performing schools, and perhaps encourage commuters interested in "service" to become active in student-focused programs, thereby uniting volunteers from relative wealth and success with intercity youth who might not otherwise have mentors in their lives that can provide strong career paths.

Like Meeks, Braun might use maps to visualize and unite our faith community, in areas where students live, and then build tutor/mentor facilities to help local youth onto paths that lead to college and career, versus welfare and crime.

Maps can show relationships among school performance, crime, and all of the aforementioned resources as well. Braun’s platform and political track record show that education and public safety are serious concerns of hers, recognizing that “kids should be able to expect a quality education in their own neighborhood... [which] will take involvement from parents, teachers, our community and our government,” that the “best way to stimulate economic and educational development is to keep people safe," and that "it will take a mayor with diplomatic, coalition building expertise to bring together the resources Chicago needs to protect its neighborhoods.” 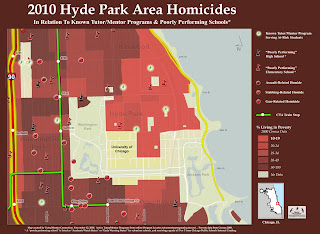 As a long-time resident of Hyde Park, an island of academic and business wealth in an area of the south side of Chicago that is relatively impoverished and crime-ridden, she has first-hand concerns that the recently reported drop in violence might be misleading, and reminds us that crime is still a serious problem, before offering a message of hope, that violent crime “is not insurmountable. This is something we can do something about."

She cites mentoring programs as part of the solution.

Perhaps she is using maps to help her visualize where these mentoring programs might be needed most. And then uniting resources the maps show are available to help build great programs all over the city.

(I should mention that these maps are not intended to show where service work is, or is not occurring. They are also not meant to endorse, or criticize elected leaders. The voters should make those decisions.)