The Impact of Mapping Resources in a High-Poverty Neighborhood: A Reflection on the Map Kibera Project

A friend of mine pointed me to an ongoing OpenStreetMap project in one of Africa’s largest slums on the outskirts of Nairobi, Kenya. “Kibera” is inhabited by hundreds of thousands of poor people; has hospitals, schools, and structure; and yet amazingly, according to project leaders and a 3 minutes long BBC mini-documentary/slideshow, Kiberia remains hidden from the world - designated as forest on government, Google, and other publicly available maps.

Map Kibera is a project that was started in October 2009 by Erica Hagen and Mikel Maron (with initial funding by Jumpstart International). They advocate that, "without basic knowledge of the geography and resources of Kibera it is impossible to have an informed discussion on how to improve the lives of residents."

When my friend contacted me with a link to this project, he said he thought I'd find it interesting but also told me he thought, "this is pretty different than what you're doing." Actually, I contend that this is very similar in many ways to what we are trying to do at Tutor/Mentor Connection (T/MC).

The aforementioned BBC short film explains a bit more about why Map Kibera received funding necessary to staff volunteers and train 13 Kiberan youth in GPS/GIS and internet technologies needed to publish an interactive online map of their own community.

The project leader interviewed in the film says, "Our motivation was, and our belief is, that without basic geographic knowledge of a certain place you cannot talk about improving people’s lives."

"To enable people to have a bigger say in their futures," you need to "know how resources are distributed in a certain place – for example, how many schools there are… how many hospitals there are… how these hospitals are equipped… how much staff they have."

"If you open up the information or data [to others], there is no saying what can be achieved out of this because a million people have a million ideas and a million things can happen."

Tutor/Mentor Connection is working with a staff of three people and no real funding to try and accomplish a similar thing in Chicago's high-poverty neighborhoods.

Are there a ton of differences between the poor of Chicago and the poor of Nairobi? Of course. But there are also many similarities. We aspire to take an inventory of all resources in our high-poverty, high-crime neighborhoods - using volunteers and empowering youth and citizens who live in the neighborhoods. Our goal is to encourage alliances and investment in student programs that improve at-risk students' lives, and in the long-term when these students grow up with their new skills through tutoring and mentoring, improve America. 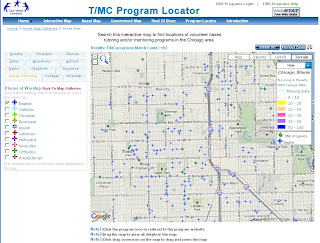 We have created an information hub of maps, data, strategies, and information, and are hoping there are "millions of people" out there with the talent and ideas to join us and make small investments of time and money to make something powerful like Map Kibera happen right here in Chicago.

I found the wiki for the Map Kibera project particularly exciting, because it documents several of their challenges as well as the specific impacts their investment has made in Africa. Most of these are also very familiar to us here in Chicago at T/MC.

Among common challenges, Map Kibera documents the "challenges of volunteerism," citing how inspiring volunteers or youth to "take charge of the project is a delicate and ongoing process" for a whole list of reasons. We at T/MC are constantly trying to find volunteers to help with the maintenance and leadership of our GIS/tech-based project

They also point to the difficulty the community (you and me, as well as localized leaders and parents) has in "understanding the larger concept and benefits [of a resource map]," specifically pointing out the general limitation of what people assume maps can do. They report that many people initially did "not see how the map could benefit them or their community since it was only available online and they already knew how to get around."

Additionally, even in Africa, there is results-based skepticism among the "average citizen [who] needed to see the results ... even if they were not able to access the Internet." This is especially frustrating when the map-makers inherently understand the technology but have difficulty "articulating the benefits and potential impact of the map at first." This is one of our biggest challenges and the purpose of this blog - to provide "many discussions, and more importantly demonstrations of the possibilities [of maps], to see comprehension of the potential for technology to bring real change" to our communities.

Map Kibera also points to the challenge of trying to convince other related organizations (in our case, we are trying to build alliances of tutor/mentor programs - but also trying to encourage cooperation among faith-based and other theoretically like-minded groups like the Baptist community featured in the second map above - to join hands in support of at-risk youth). Map Kibera shares our frustration that "organizations do not like to share information ... There are so many organizations that they tend to see each other as competition. A collaborative spirit is hard to achieve, and it is not obvious to many why they would benefit from working together ... Every group was interested in having a map for their purposes; few have the sense of why an open and shared platform for everyone could be even better. The technology world has an ethos of creative collaboration alongside competition, in the spirit of innovation and problem solving. It is hoped that this concept will over time influence organizational behavior."

Despite these challenges, hopefully the "impacts" that an organized, well-invested, map-based project like Map Kibera has had can open eyes to the wisdom of similar programs - such as T/MC in Chicago.

Participants from Kibera, in their own words, according to the Map Kibera wiki, claim to have learned new technical skills, taken new-found pride, and obtained new social/advocacy skills that "may translate to other experiences and support their overall personal development," and could certainly lead to "leadership skills and [a new] sense of responsibility to the community." Tutor/Mentor Programs such as Cabrini Connections have clubs that teach tech skills as well as other media skills that can have these same effects. In fact, Mapping For Justice has worked closely with these clubs in the past and has even developed curricula designed to teach similar advocacy-through-mapping skills, if time and investment ever allows.

In addition to the "personal impact" on participants, Map Kibera documented "community impact," such as bringing "the community closer to legitimacy and giving a sense of being a real neighborhood. Sensitive to external perceptions and its negative reputation, Kiberans appreciate any image such as this map that portrays it in a positive, or at least 'normal' light." Clearly one of our missions has been to supplement the negative news a ghettoized and beleaguered neighborhood like Englewood in Chicago receives, to encourage potential volunteers and business leaders to re-imagine the potential of these neighborhoods' wealth of talented students.

Excitingly, Map Kibera's impact has lead to an increased number of organizations that are suddenly "keen to be represented and eager to learn how they can make use of the map as well as the [program] site to highlight their activities ... Groups that are interested in a variety of issues such as health, gender-based violence, sanitation, new mobile phone services, farm-to-market supply chain, large-scale conflict mapping, peace promotion, and others have contacted the directors to look into collaboration or use of collected data, sparking new thinking on each issue and the potential for the project to move in unexpected directions."

This sort of community participation through the use of maps is the ultimate goal of T/MC's Mapping For Justice project.

Thanks again to my friend who pointed me to the Map Kibera project. It has allowed me to reflect on similar goals, problems, and solutions we are facing right here in Chicago. Hopefully it has also opened the eyes of those who are curious and seeking "proof" that mapping can impact the ways organizations like T/MC can bring positive change to our communities.

(If nothing else, I am at least encouraged someone is thinking of our work at Mapping For Justice when they find a project like Map Kibera!)