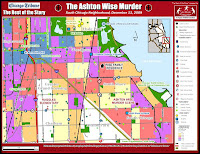 Today's Chicago Tribune devoted two full pages to the changes taking place in the South Shore neighborhood of Chicago, and of how the violence is causing many young African American families to move out of the city, and often out of Illinois.

I've been using maps to focus attention and draw resources to high poverty neighborhoods since launching the Tutor/Mentor Connection in Chicago in 1994.  This map was created in 2009, following a shooting in the South Shore area and was included in this article, I hope you'll read it. I hope local leaders will also read it, and other articles I've shared in this and the Tutor/Mentor blog. 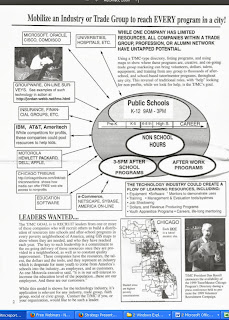 At the right is a page from a 1990s edition of the Tutor/Mentor Connection printed newsletter. (see it and others here). I've been sharing ideas like this for more than 20 years, yet with too little support from business, political leaders, faith leaders and peers.

The appeal for financial support of the T/MC that was included in our 2009 article was not answered and since 2011 I've not had anyone on staff to create maps like this, or to update the interactive tutor/mentor program locator, which can also be used to create story maps.

As the Chicago media remind us daily, the problems that prompted me to create the Tutor/Mentor Connection in 1993 (and launching in January 1994) are still with us in 2017.  I'm just a lot older, and a lot poorer, and am now leading this effort via the Tutor/Mentor Institute, LLC, which is also not generating nearly the revenue needed to support this work in all the ways I describe in my past articles.

Thus, a month ago I posted an article about a "do-over",  inviting others to adopt and share ownership of the T/MC, using their own talents to lead it for the next 20 years...hopefully with greater impact and success than I've been able to provide.

I hope you'll take a look and share this with others who might respond to the invitation.
Posted by Tutor Mentor Connections at 11:26 AM