Today on Twitter one of my new followers was Steve Whitla, who's based in Oxford, England. Before I follow back I always look at the types of Tweets someone is posting.  At the top of Steve's page was a TED talk video, talking about the value of maps and systems thinking. I've pasted it below and hope you'll look at it.

Below is one graphic that I've created that I thought of as I watched this talk. You can see an explanation of this graphic in this article. 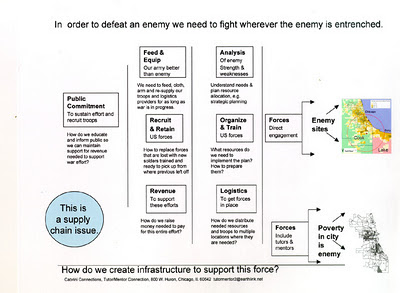 As I listened to the TED talk, I saw three distinct challenges.

First is the work of collecting information and creating maps.  On the right side of my graphic is a map of Chicago, with overlays showing where poverty is concentrated. I have been building additional overlays showing where non-school tutor/mentor programs are located, with a goal of helping all of them get the resources needed to help kids through school. You can find many stories on this and the Tutor/Mentor blog that include maps that focus on this goal.

There's a significant cost involved in collecting the data for my maps, and keeping it current, and in making maps, or hosting maps on platforms like the Tutor/Mentor Program Locator.  As you watch the TED talk, keep in mind the work and cost involved in creating the mapping platforms that are described. I've never found much money, or consistent talent, to support my own efforts. That's a major barrier to this work.

Second is the work of motivating growing numbers of people to look at the maps, and use them in the type of reflection and analysis that is described in the TED talk.  On the far left of my graphic is a node that focuses on "building public will".

Step two in the 4-part strategy of the Tutor/Mentor Connection, which was developed in 1993, focused on building public awareness. Finding ways to do this without advertising and public relations dollars is a huge challenge.  While the Internet offered a low-cost way to share ideas with the world back in 1998, it's now dominated by people with dollars to buy attention, or by people who have high visibility, and do crazy things, to attract attention.

Yet, if we don't get enough people interested in looking at this information, and using time, talent and dollars, to support the work of individual tutor/mentor programs, as well as those who collect the information and create the maps, we won't have much success in making good programs available to more kids.

Third is the role of network-builder, facilitator, mentor and teacher. That's the role Steve was taking in his TED talk, and the role I take with my web sites, blog articles, Tweets, and other social media activities.  Someone, or many someones, needs to be making an effort daily to connect people with the maps and information available and help them understand how to use it, and how to apply it to their own life experience and opportunities.

I often compare my maps to "blueprints" that are used by contractors to build buildings.  At every stage of the building process, work needs to be done by people with different skills.  They all need to be paid, or they normally won't do the work and the building does not get built. They also all need to have a certain level of skills, or the building won't stand, even if it does get built.

In solving social and environmental problems facing the world we need blueprints, as Steve is suggesting in his TED talk, and we need resources to support all three stages of this process.

I've been sharing ideas and graphics like this in articles at http://tutormentor.blogspot.com since 2005 and at  http://www.tutormentorexchange.net since 1998. I look forward to connecting with others who are interested in these ideas.

UPDATE:  Here's an article about how traffic accidents are killing 1.25m people per year, and costing 3% of global GDP. The same systems thinking approaches that would apply to helping kids have greater support systems applies to this issue.
Posted by Tutor Mentor Connections at 9:56 AM

The thing about mapping is that it can reveal that which we can't see in other forms. It brings data into the visual, and makes it more 'readable' for the eyes and brain.
Thanks for sharing the video and for your notes and experiences.
Kevin

I keep adding new articles showing maps that can be used to create stories showing poverty, segregation, racial distribution, etc. Educators can lead their students to these maps and encourage them to use them to think of ways to fill map areas with programs and services that might create greater equality or less poverty, and then how to use the maps to create their own stories.

Hi Daniel, really appreciate your thoughts on the presentation - it got me thinking over the weekend, and I've posted some immediate thoughts on the challenges you raise here:

Look forward to reading more of your work.