How to Increase Focus on Black Issues, when Share of US population is less than 14%

Here's a Tweet from BrookingsMetro that I saw this week:

The map shows a heavy concentration of African Americans in the South East and along the East Coast from New York City South to Florida and in many large cities spread across the country.

I'm in Chicago, and started leading a tutor/mentor program serving African American kids living in the Cabrini Green public housing area in 1975. In 1993 I created the Tutor/Mentor Connection (T/MC) to help mentor-rich non-school programs, like the one I was leading, grow in all high poverty areas of Chicago, which were mostly African American and Hispanic neighborhoods. 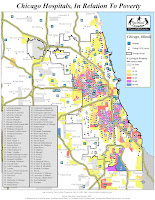 I've been using maps since 1994 to show high poverty areas, in an effort to build public attention and motivate more people to provide time, talent and dollars to help youth tutor/mentor programs grow in all of these areas.

I use tags to help sort the articles in my blog, so if you click the #poverty tag, you can find a series of articles with various maps that show the demographics of Chicago the concentrations of poverty in the USA.

Over the past 30 years the population of Black kids in the city has been decreasing.  It's still a huge number, but the Hispanic population is almost the same, and many African Americans who lived in the city are now living in the Chicago suburbs, or have moved out of state.

The work I've been doing since early 1990s is building a web library with information anyone can use to better understand issues, know more possible solutions, and then use these ideas in efforts to build and sustain youth tutor/mentor and learning programs that reach more k-12 kids in high poverty areas with support systems that help them move through school and into adult lives free of poverty.  In the concept map below I point to sections of the Tutor/Mentor Connection web library, with links to articles about poverty, race issues, inequality, Black History, etc. 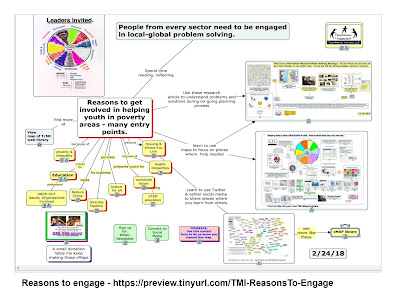 In looking at the Brookings article and map I have some questions.

a) How do we attract and maintain attention and support for those kids still living in high poverty neighborhoods of Chicago as the population changes?

b) How do we attract and maintain attention on social justice, inequality and other issues that focus on the lives of people whose ancestors came to America as slaves many years ago, when most parts of the country don't have a significant population of people with this background....and when the overall percent of African Americans in the total US population is  under 14%

Would it be helpful to show similar maps with Hispanic and immigrant populations, showing what percent live in poverty, and where they live? Are there shared experiences that are similar, and that could create political bonds that focus on solutions at the national level?

I really don't know.
Posted by Tutor Mentor Connections at 10:07 AM