Recently, I posted several maps that examined the Illinois 15th State Senate District. Today I would like to focus in on the 34th Illinois House District, currently represented by Connie Howard.

I want to emphasize out of the gate that when we make maps to showcase a political leader's district, the maps are not intended to show where service work is, or is not occurring. They are also not meant to endorse, or criticize elected leaders (The voters should make those decisions).

So why do we create maps? Again, we are just trying to analyze specific areas in the Chicago area to see if the spatial data reveal any areas where where additional support for tutoring and/or mentoring programs may be needed... areas where underserved children live with disadvantages created by poverty and underperforming schools and, with a little help, may end up on a better path to higher education and fruitful employment (versus paths ridden with crime and hardship that are frequently exploited by the media).

So let's see what the data we've collected might tell us. In this first map... and please click on any of these maps for a bigger, higher-resolution version... 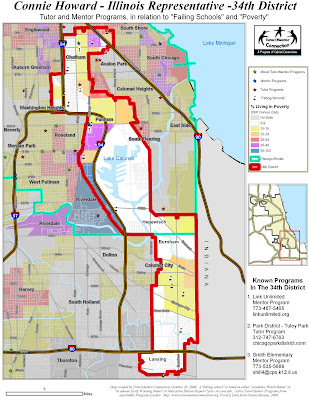 ... we see that Howard's district is made up of a slice of far-southern Chicago neighborhoods, and a sliver of near-south suburbs, cut in half by Lake Calumet. Interstate 94 runs most of the length, transporting potential volunteers past the impoverished Pullman, South Shore and Chatham neighborhoods on their commutes to work. I-80 and I-90 also pass through her district and may serve a similar function.

We also see clearly that there are pockets of relative high-poverty, some associated "failing schools," and... as is often the case, far too few tutor/mentor programs. In fact, we know of only one tutor program, two mentor programs, and zero mixed full-service tutor/mentor options for parents and kids. 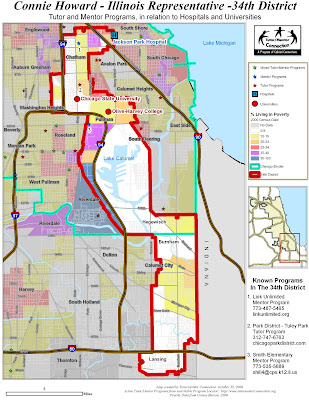 Now of course, it is possible that other programs exist in the area, but are not in our database. We live far away and are not as in-touch with the community as those who live there. With this in mind, Hospitals and Universities can help the T/MC update its data, so that the information provided in our maps represent the most comprehensive, and up-to-date data.

Perhaps, for example, the geography department at Chicago State can encourage student teams to research/unveil additional programs and resources... maybe working with us to practice mapping the communities in which they are closely invested.

And, as was the case with Mt. Sinai Hospital in Lawndale, as reported recently by Dan Bassill, Hospital leaders at Jackson Park Hospital can perhaps work together to build strategies that create/support new and existing programs... or encourage staff to volunteer at existing programs?

If you would like to learn more about these strategies, we have discussed the role of Universities and Hospitals specifically in previous blogs.

As has also been discussed in prior blogs, Places of Worship and their congregations provide ideal hosting sites for new programs, as well as places where sermons can tie scripture to service, while pointing members to existing tutor/mentor programs.

Here is a selection of known Places of Worship in the 34th District: 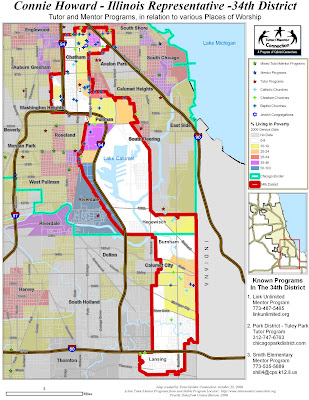 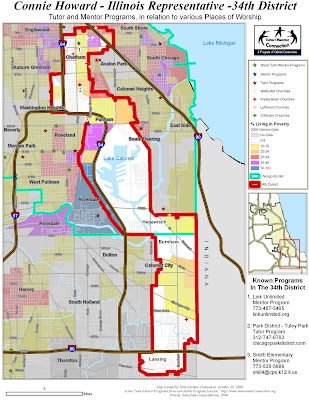 And of course, tutor/mentor programs are usually operating on shoe-string "not-for-profit"-sized budgets. Large corporations can invest in kids (their future work-force and future customers) by supporting education in their neighborhood through tutoring and mentoring.

As mentioned in prior blogs, businesses need to dig into their philanthropic budgets to fund the programs. This is such a priority. Without funding, programs die and kids are turned back to the streets for guidance.

And/or perhaps they can use their web presence to educate the masses about opportunities to help T/M programs, and why it's so important... maybe they simply post information in-store, spreading the word to customers, clients, and parents?

Mass-Market Retailers (such as pharmacies like CVS and Walgreens) can serve all of these functions: 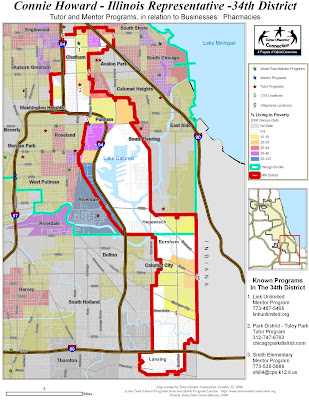 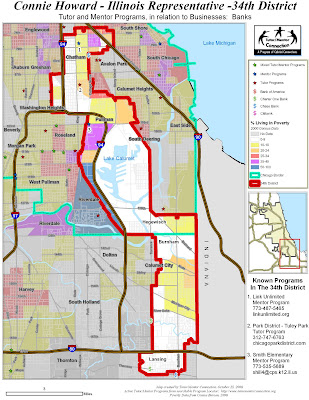 And of course, why do I mention all of this in the context of an elected political leader?

Well, quite simply, no one guards the best interests of a population like an elected leader. And I can only assume these political leaders are strongly interested in the benefits tutoring/mentoring can bring to the families in their constituency.

It stands to reason then, that political leaders would want to look at these maps - using them as tools - when working with other community leaders (from businesses, places of worship, schools, hospitals, and universities) to build strategies that create and fund tutor/mentor programs...

And in turn, improve the prospects for our children, our economy, and our democracy.

Email ThisBlogThis!Share to TwitterShare to FacebookShare to Pinterest
Labels: politics