We here at The Tutor/Mentor Connection (T/MC) are always encouraged when community leaders use their position and visibility to spark debate in the never-ending search for solutions to failing schools and poverty. For the past several months, Illinois State Senator James Meeks has been an enormous sparkplug in the news, stirring controversy which has successfully forced these issues into the spotlight.
For instance, over the summer, he blamed Chicago's Mayor Daley for the miserable conditions of schools in segregated and impoverished sections of Chicago. Senator Meeks has also been in the news recently for leading a boycott of Chicago Public Schools (whereby kids would skip the first day of classes and travel to enroll in prestigious New Trier High School in affluent Winnetka... in an effort to spotlight inequity in public school funding). And most recently, he was in the news during the Cubs' (brief) playoff appearance, when he organized a demonstration for school-funding reform by encircling Wrigley Field with parents and students during the Cubs' first playoff game.

Now I'm not supporting or condoning the appropriateness of these strategies. But clearly they were effective in getting the stories toward the front page. Back in August, Dan Bassill wondered if this is enough. In a blog he wrote back then, he challenged both the media AND politicians such as Meeks, suggesting that, "writing infrequent, sensationalist, media stories; making speeches, and marching in the streets won’t get more people personally involved in helping other people’s kids grow up. [Meeks], the mayor, and the media need to be thinking of new ways to get business people (of all colors, and from the city and suburbs) personally engaged in the lives of economically-disadvantaged kids. To me, that means they should be talking about volunteer-based tutoring/mentoring... They should also be talking about how churches, banks, and community health centers in high poverty neighborhoods, and along the routes city workers take in coming and going to work each day, could be hosts to tutor/mentor programs... Finally, they should be thinking of ways to encourage people who go to church every Sunday might give 2 to 3% of their wealth each year to support these tutor/mentor programs... Non school programs need an infusion of private sector and corporate money. Who better to lead in the giving than people of faith?"
And this is what makes Senator Meeks an interesting ally for all of us involved with tutoring and mentoring. In addition to being an influential politician who is championing efforts to improve schools and fight poverty, he is an influential church leader, presiding over the (large) congregation at Salem Baptist Church of Chicago on the far South side, near his 15th district.
So with this in mind, I would like to explore how the Tutor/Mentor Connection's (T/MC) maps can be used as tools to help Senator Reverend Meeks and his constituents work to create strategies that promote the development of tutor/mentor programs. 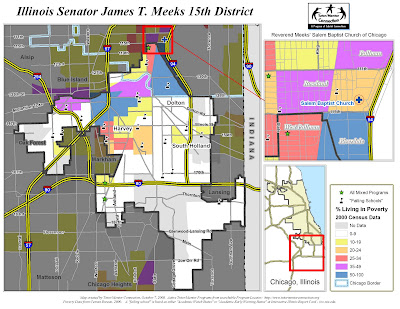 (click on the map above to see "full-sized" version)
The left portion of the first map features the Illinois 15th State Senate District, currently represented by Reverend Meeks. The northern tip pushes across Chicago city boundaries, but the majority of his jurisdiction is "near-south suburban" and split among relative poverty and affluence. Please note that there are FOUR major highways here, two of which bring commuters directly into, and out of the city. Potential volunteers come through the district and could certainly help support Tutor/Mentor Programs in the 15th and elsewhere in the city.

And speaking of mixed Tutor/Mentor programs, there are not a lot of known ones here, it seems. We currently know of a mere three (3) mixed tutor/mentor programs in the 15th district. This is not uncommon though - as we've seen, there just aren't enough anywhere.

I'm completely confident, however, that Reverend Meeks (whose church and surrounding neighborhoods are featured in the inset map at the top-right corner of this map) would be interested in seeing this map, and working to increase this number of programs. How can I be sure? Well, his public service record is extremely impressive, serving as as the Executive Vice President of the National Rainbow-PUSH Coalition; as a member of the Board of Directors for the Chicago Fire Department, the Roseland Community Hospital, the Korean American Merchant Association, and the Olive Branch Mission.

And look at this! He has apparently already created a mentoring program called “It Takes a Village,” to provide support and assistance to pregnant youth and young mothers! (We do not have this program in our Chicago Tutor/Mentor Program List, and would love to work with Senator Meeks to help support this program, and to build strategies that will increase the availability of tutoring and mentoring in his district.) 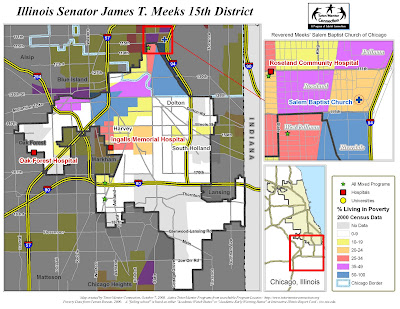 (click on the map above to see "full-sized" version)
This second map features hospitals in his district (interestingly we know of no universities or colleges in this district). As we've discussed in earlier blogs, Universities and Hospitals have important and intimate relationships with their communities, and can work to support the growth of Tutor/Mentor programs.

As pointed out above, Reverend Meeks already has a working relationship with Roseland Community Hospital. Perhaps he has already considered forming learning circles which can meet at the hospital - complete with hospital leaders developing engagement strategies that might reach more youth throughout the entire district. Perhaps he or other hospital leaders would like to know about the T/MC's presentation: Tutor/Mentor Hospital Connection. 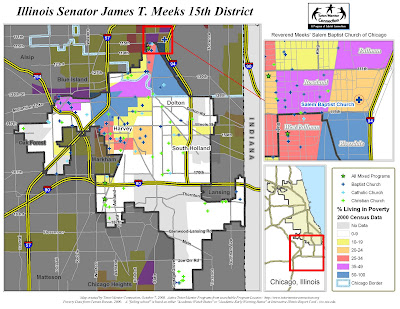 Lastly, and perhaps most-obviously, as pastor of Salem Baptist Church of Chicago, Reverend Meeks has the ear of over 24,000 followers.

As discussed in the blog on Chicago's Places of Worship, the Tutor/Mentor Institute has a document called "How Faith Communities Can Lead Volunteer Mobilization For Tutor/Mentor Programs", detailing how all church leaders "can be delivering sermons on a regular basis, that tie scripture and service, and point members to tutor/mentor programs that already exist, or to neighborhoods, where new programs need to be created."

Furthermore, Reverend Meeks's influence surely stretches beyond his congregation and into neighboring Baptist churches, Catholic churches, and other "general" Christian congregations in his district (shown in the map above). 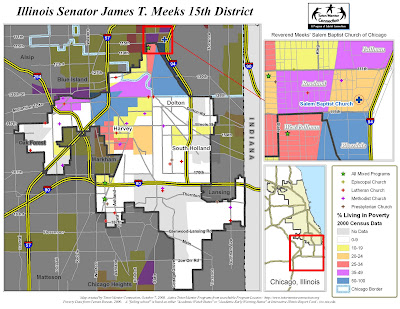 Also, there are Episcopal, Lutheran, Methodist, and Presbyterian churches within the influence of Reverend Meeks. Each of these locations represent additional sites where congregations can meet to learn about tutoring and mentoring, and where church leaders can evangelize to get donors to contribute to the growth of programs. Please refer also to Tutor/Mentor Institute's suggested communications strategy for Faith Communities.


In sum, regardless of what you think of Senator Reverend Meeks's techniques in his fight against unjust forces that impede the progress of kids in underserved communities throughout in Illinois, you cannot deny that his heart and passion - and leadership both politically and spiritually - make him a perfect candidate to advocate on behalf of tutoring and mentoring. I am certain that the T/MC and Reverend Meeks will form a perfect alliance for this cause.

I should mention, if it's not already clear, that these maps are not intended to show where service work is, or is not occurring. They are also not meant to endorse, or criticize elected leaders. The voters should make those decisions.

Note: since 2011 the Tutor/Mentor Connection has been operated by Tutor/Mentor Institute, LLC. While this is not a tax exempt organization, it still depends on contributions to continue this work. Please consider a small donation this holiday season
Posted by Mike at 4:23 PM